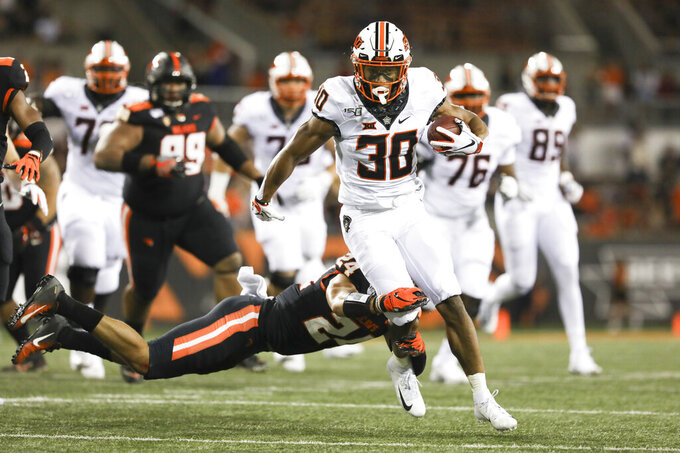 CORRECTS TO CHUBA HUBBARD, INSTEAD OF GABE SIMPSON - Oklahoma State running back Chuba Hubbard (30) is brought down by Oregon State defensive back David Morris (24) during the first half of an NCAA college football game in Corvallis, Ore., Friday, Aug. 30, 2019. (AP Photo/Amanda Loman) 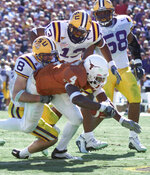 Some things to watch in the Big 12 Conference on the second Saturday of the season:

No. 6 LSU at No. 9 Texas. This is the first matchup of Top 10 teams in Austin since October 2008, and is the nation's first such game this season. Just more than nine months ago, the Longhorns beat SEC runner-up Georgia in the Sugar Bowl to cap their first 10-win season since 2009, when they lost the national championship game. LSU and Texas haven't met in the regular season since 1954. They have since played in two Cotton Bowls — the Longhorns won 35-20 on New Year's Day 2003, 40 years after LSU's 13-0 win in Dallas. Tom Herman calls Texas "his dream job," but there were some contract negotiations with LSU before he got hired as coach of the Longhorns in late 2016. The Tigers then removed the interim from head coach Ed Orgeron's title.

LSU quarterback Joe Burrow, the former transfer recruited to Ohio State by Herman, against homegrown Longhorns starter Sam Ehlinger, who has flourished in the coach's three seasons at Texas. Herman became Houston's head coach in December 2014 before Burrow signed with the Buckeyes. Burrow was at Ohio State for three years before become LSU's starter last season as a grad transfer. He had an LSU record-tying five TD passes in this year's opener. Ehlinger tied his career high with four TD passes in the Longhorns opener, and the junior from Austin has 27 TD passes with only three interceptions the last 14 games.

The Big 12 went 10-0 on the opening weekend, only the second time in its nine seasons as a 10-team league that every team played and won on the same weekend. ... The Big 12 is the only league that hasn't thrown an interception. Every other conference has at least seven. ... Kansas State coach Chris Klieman and Texas Tech's Matt Wells both had 35-point wins in their debuts as a Power Five coach. That was the largest winning margin ever for a Wildcats coach in his first game with the program. Only one of Tech's previous 15 head coaches got started with a more lopsided victory (a 39-point win for DeWitt Weaver in 1951). ... With new coach Les Miles, Kansas goes into its home game against Coastal Carolina looking for its first 2-0 start since 2011.

South Dakota, which opened the season with a two-touchdown home loss while giving up 510 total yards to fellow FCS team Montana, now plays at fourth-ranked Oklahoma. The Sooners have more Big 12 championships (12) than home losses (10) the last 20 years.

Oklahoma State sophomore Chuba Hubbard had 221 yards rushing in the opener at Oregon State, making him the early national leader. Hubbard was the Cowboys' primary runner the final four games last season after Justice Hill's injury, when he averaged 106 yards rushing per game.

By The Associated Press 46 minutes ago
2 hrs ago
By Ralph D. Russo 5 hrs ago
6 hrs ago
By Corey Williams And Rick Callahan 9 hrs ago