LSU opens Kelly era vs. Florida State in the Superdome 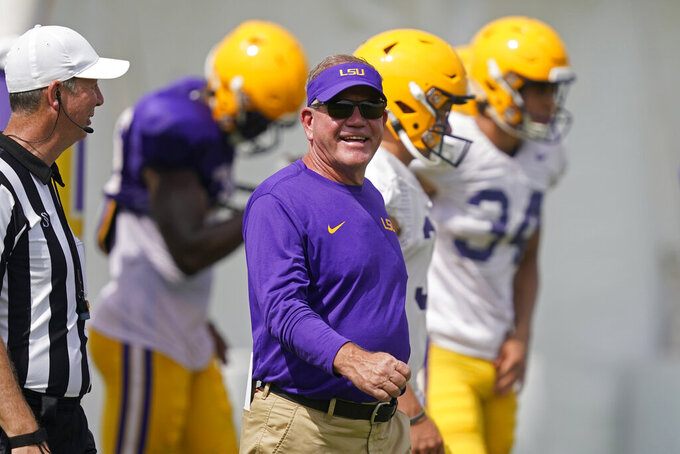 It’s Brian Kelly’s debut as LSU coach. Kelly has overhauled the coaching staff and the roster as he tries to rebuild the Tigers into a Southeastern Conference powerhouse following two straight seasons without a winning record. Florida State looks to build on a 47-7 demolition of Duquesne last weekend to open its third season under coach Mike Norvell. He may be running out of time to turn the Seminoles program around after finishing with losing records in each of his first two seasons.

Florida State: Travis is now in his fourth season with the Seminoles after emerging as the top QB last season. He is a dual threat player whose career highlights include a 31-28 victory over Miami last season in which he accounted for 336 yards of total offense (274 passing, 62 rushing) and ran for two TDs. In a 35-25 victory over North Carolina, Travis accounted for all five Seminoles touchdowns (three passing, two rushing).

LSU: WR Kayshon Boutte is a Biletnikoff Award candidate who returns to action after missing the final seven games last season with an ankle injury. In 16 career games, Boutte has caught 83 passes for 1,244 yards and 14 TDs. As a freshman against Mississippi, Boutte set the SEC record for yards receiving in a game with 308 on 14 receptions. Boutte ranks fourth in LSU history in yards receiving per game with 77.8.

Kelly declined to announce a starting quarterback for his opening game in charge of LSU. Competition for that role has been tight between second-year QB Garrett Nussmeier and Arizona State transfer Jayden Daniels. ... Florida state has won its past four meetings with LSU. ... The Seminoles returned their entire starting secondary this season, led by safety Jammie Robinson. ... LSU is 14-5 all-time in games played in the Superdome, just 80 miles from campus. In the regular season, the Tigers have gone 10-2 in the dome. LSU's 2003, 2007 and 2019 national championships were all claimed with victories in the Superdome.