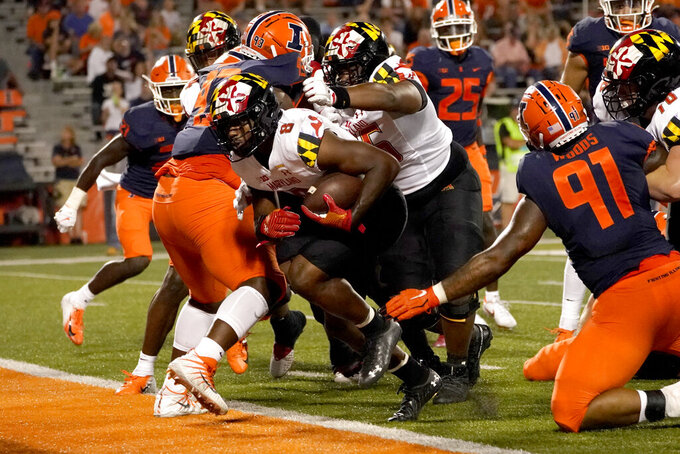 Maryland running back Tayon Fleet-Davis (8) rushes for a touchdown during the second half of the team's NCAA college football game against Illinois on Friday, Sept. 17, 2021, in Champaign, Ill. Maryland won 20-17. (AP Photo/Charles Rex Arbogast)

Then the Terrapins made things difficult for themselves in last week's victory at Illinois.

“If there’s anything I’ve been the most proud of — up until this past game — was we hadn’t turned it over, and we hadn’t had many penalties," Locksley said. "To me, to be a good offense, it starts with not beating yourself first.”

Maryland will try to recapture that mistake-free groove Saturday when the unbeaten Terps host Kent State in their final nonconference game of the regular season. After this weekend, Maryland's next two games are against Iowa and Ohio State — two teams that can punish the types of errors the Terrapins made last week.

Maryland (3-0) won its opener against West Virginia in large part because it forced four turnovers. The following game against Howard was a blowout. Then the Terps fumbled twice in the second half against Illinois. Maryland also had a touchdown negated because of a penalty.

The Terrapins prevailed 20-17 because quarterback Taulia Tagovailoa and his receivers were able to execute under pressure, but there's plenty of room for improvement this weekend.

Kent State (1-2) has already faced some difficult tests. The Golden Flashes lost to Texas A&M and Iowa by a combined score of 71-17, although their deficit was in single digits at halftime of each of those games.

Kent State coach Sean Lewis sounded similar to Locksley when he talked about the importance of avoiding miscues.

“Fundamentals and ball security, as boring as that is. It's like a chocolate milkshake — it works," Lewis said. "When done right, it's done right. So take care of the football, and let's have great technique and fundamentals. No one needs to put their Superman cape on.”

Tagovailoa is averaging 319 yards passing per game, the second-best mark in the Big Ten. He's completed 75.5% of his passes, with seven touchdowns and no interceptions.

Tagovailoa has 956 yards passing, the most by a Maryland player through the first three games of the season since Scott Milanovich had 1,109 in 1993.

While Maryland has a deep receiving corps, Kent State leans on its running game, which averaged 283 yards last year. The Golden Flashes ran for 226 yards against Texas A&M.

Running backs Marquez Cooper and Xavier Williams and quarterback Dustin Crum have all run for over 100 yards on the season. Kent State is averaging 266 yards rushing a game in 2021 and 5.4 yards per carry.

Maryland's Sam Okuayinonu has four sacks through the first three games. As a team, the Terrapins have 11, including six against Illinois.

The Terps have been mostly strong defensively over the past two games, although Illinois did go 8 of 17 on third down.

“We didn't get off the field on third down, which I think resulted in them getting 27 extra plays," Locksley said.

A victory this weekend would give Maryland its first 4-0 start since 2016.

“It's handling adversity. I feel like this team has been able to so far," receiver Jeshaun Jones said. "We have to keep building, to work on that, because we are going to be in more adverse situations.”