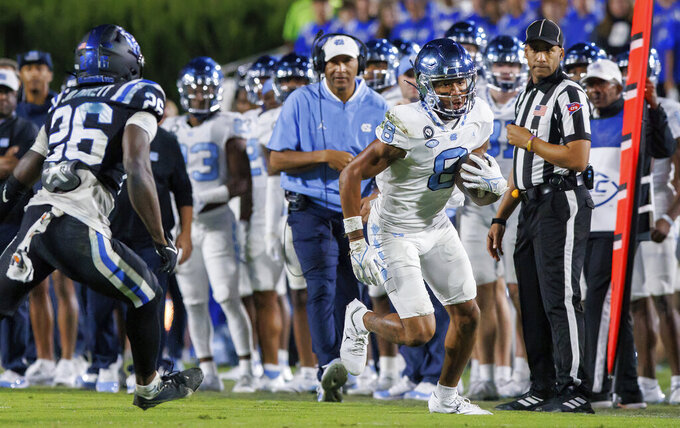 North Carolina's Kobe Paysour (8) runs after a reception during the second half of the team's NCAA college football game against Duke in Durham, N.C., Saturday, Oct. 15, 2022. (AP Photo/Ben McKeown) 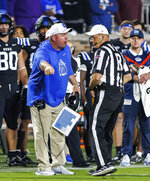 DURHAM, N.C. (AP) — North Carolina's late comeback came down to a final handful of seconds — and only a few blades of grass.

Drake Maye connected with Antoine Green for an 8-yard score with 16 seconds left that stood up on replay review, lifting the Tar Heels past rival Duke 38-35 on Saturday night.

Maye's throw capped a nine-play, 74-yard drive for a touchdown that stood on the slimmest of margins. Replays showed Green's left foot land barely inside the sideline — with only a sliver of grass detectable between Green's foot and the white paint — before officials declared after a review that the touchdown call would stand for the Tar Heels (6-1, 3-0 Atlantic Coast Conference).

“I mean, I felt like I got in before I had even seen the replay,” Green said. “I was confident in that.”

Still, Green admitted to having “a little concern” during the stoppage that the close call might go the other way. He even quipped that he jokingly told one of the officials: “Don't do it, don't overturn it.”

“That replay was about as close as it gets,” Maye said, adding: “But I thought I saw a little green.”

Duke (4-3, 1-2) drove to midfield in the desperate seconds for a possible tying field goal, but UNC's Noah Taylor batted Riley Leonard's pass skyward for teammate Will Hardy to make a clinching diving interception with 2 seconds left.

“He was open. Just a tipped ball,” Leonard said. “Unfortunate. Probably would've set us up for a field goal.”

That sent UNC fans into wild cheers with a still-unbeaten record in league play as the Coastal Division leaders, not to mention the chance to keep the Victory Bell that goes to the winner of the longstanding rivalry for a fourth straight year.

Maye threw for 380 yards and three touchdowns to lead the Tar Heels, while Josh Downs had nine catches for 126 yards that included a couple of spectacular grabs.

Leonard threw for 245 yards and a touchdown to go with a 74-yard scoring keeper to lead the Blue Devils. Jordan Waters ran for 91 yards and two scores, including his own highlight-reel moment with a 38-yard cutback run past multiple UNC defenders for a score and a 35-31 lead with 10:12 left.

Yet this one ended like each of the three since Mack Brown returned for a second stint leading the UNC program: with the clanging sound of the Victory Bell as the Tar Heels jubilantly dragged its cart off the field and rolled it toward the locker room.

UNC: The Tar Heels have looked wobbly all season defensively while being carried by a stat-producing offense led by Maye, so much so that Brown said UNC is never out of a game with Maye. The last drive reinforced that fact, keeping the Tar Heels in control of the always-unpredictable division race. And considering the Tar Heels were the top vote-getter among unranked teams last week, they could find their way into Sunday's new AP Top 25 poll, too.

“We've still got so many things we can fix,” Brown said. “We can play so much better. That's the fun part of this team. There's an upside here that we haven't scratched.”

Duke: The Blue Devils did plenty right in this one, including running for 297 yards while getting two takeaways. But they came up empty on a drive with a missed field goal that could've pushed the late lead to seven, then couldn't come up with a final stop on Maye in the Tar Heels' go-ahead drive.

“I told our kids: I couldn’t be more proud with the way we battled," first-year coach Mike Elko said. “We knew we were going to have to. We knew it was going to be that kind of game where we were just going to have to keep trying to make plays to keep up with them.”

After trailing 21-10, the Tar Heels came up with a nine-play, 75-yard touchdown drive that ended with Caleb Hood's scoring catch from Maye with 13 seconds left before the break. Then came the final drive, which included Maye's chain-moving 11-yard pass to Downs on fourth down.

UNC: The Tar Heels are off next week and return to action Oct. 29 at home against Pittsburgh in another division matchup.