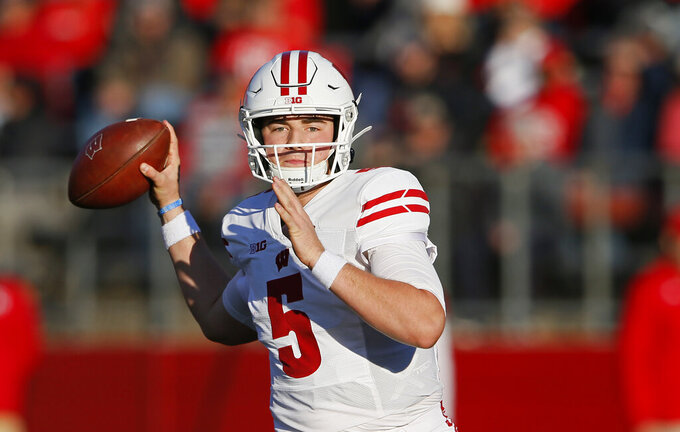 Yet he resists the temptation to speak in those terms, even as Wisconsin’s passing attack finally is starting to deliver on its potential during this six-game winning streak. Mertz realizes there’s still plenty of work ahead as the 19th-ranked Badgers chase their fourth Big Ten championship game appearance in six years.

“It’s been fun to win,” Mertz said. “We’re going to keep doing whatever it takes to win. I wouldn’t say it’s rewarding yet. We’ve got a couple more games. We’ve got to finish strong.”

Wisconsin owes its streak largely to its top-ranked defense’s knack for producing big plays and running back Braelon Allen’s ability to bowl over potential tacklers.

But the Badgers also are getting more production from a passing game that had delivered more turnovers than touchdowns for much of the season.

“It’s everyone kind of doing their part in it,” coach Paul Chryst said. “I think the protection has been good. Graham’s had time. I think that the routes have been where they need to be, and I think Graham’s been seeing it and trusting it and giving it a chance to give guys an opportunity down the field.”

The change has been most notable the last two weeks.

That represents quite a reversal of fortune.

Mertz was Wisconsin’s first top-100 247Sports Composite signee who didn’t play on the offensive line since 2007, putting him in the spotlight as soon as he signed with the Badgers. He raised expectations by going 20 of 21 with five touchdown passes against Illinois last year in his first career start.

But he threw 11 interceptions with only three touchdown passes over a stretch of eight starts that began last season and carried over to the first three games of this year. This slide culminated with a four-interception performance in a 41-13 loss to No. 6 Notre Dame (No. 8 CFP).

Mertz insists his confidence never wavered. His teammates vouch for him in that regard.

“I feel like Graham never gets shook or anything like that,” wide receiver Danny Davis said. “He stayed true to himself during those hard times.”

Wisconsin’s 38-17 loss to No. 8 Michigan (No. 6 CFP) the week after the Notre Dame game underscored Mertz’s importance. Wisconsin trailed 13-10 when Mertz left with a chest injury early in the third quarter. Michigan scored 25 straight points after his departure.

Mertz returned the next week. The Badgers haven’t lost since.

“He figured it out and kind of brushed that stuff off and realized it doesn’t really matter what anyone else is saying,” tight end Jake Ferguson said. “He put on those horse blinders and kind of had that tunnel vision to where it was only what the team (thought that) mattered. He knew we had his back, and we knew what he was capable of.”

Mertz isn’t the biggest reason for Wisconsin’s turnaround. Wisconsin leads the nation in total defense and has forced 16 turnovers in its last four games. Allen has rushed for over 100 yards in six straight games while forcing opposing defense to focus their attention on him.

But the passing game has capitalized on the fact defenses have to focus their attention on slowing down Allen. Mertz completed his first nine pass attempts against Northwestern. Nine different Wisconsin players ended up catching passes from him.

Wisconsin receivers understand they must have plenty of patience because of the team’s run-first approach. Now Davis, Kendric Pryor, Chimere Dike and Ferguson are getting more opportunities to showcase their skills.

“We’ve got great receivers here,” Mertz said. “It’s my job to get them the ball. When they get the ball and make plays in space, it’s fun. I know what they’re capable of.”