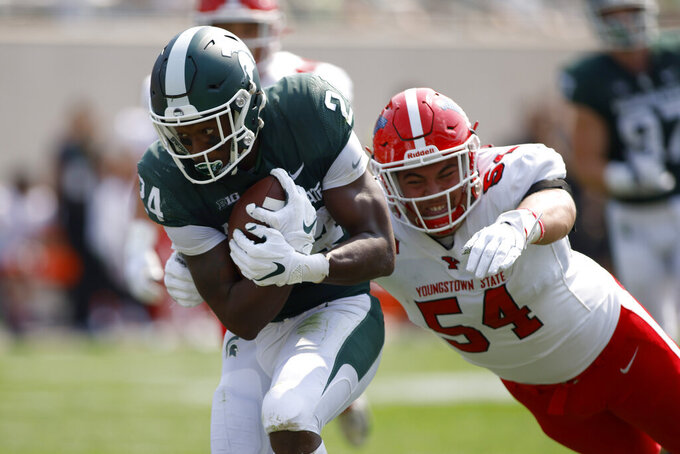 FILE - Michigan State running back Elijah Collins, left, runs for a touchdown against Youngstown State's Vinny Gentile (54) during the second quarter of an NCAA college football game Sept. 11, 2021, in East Lansing, Mich. Collins is among the candidates to fill the hole left by the departure of Kenneth Walker III. (AP Photo/Al Goldis, File)

Michigan State leaned on Kenneth Walker III a lot during its turnaround season, handing him the ball 22 times a game with much success.

This spring, and in the fall, someone else will need to run the ball for the Spartans because Walker skipped his senior season to enter the NFL draft. The top candidates for the role may be a mystery until the season starts Sept. 2 against Western Michigan.

When spring drills end Saturday, the lack of healthy offensive linemen has led coach Mel Tucker choosing to have a practice instead of a game with fans in the stands at Spartan Stadium.

“I would love to be able to play a traditional game if we could," said Tucker, who won the Big Ten Coach of the Year award last season. “But our numbers won’t allow us to do it."

Walker had some eye-popping numbers during a breakout season.

He ranked second in the FBS with 1,636 yards and was among the nation’s leaders with 19 touchdowns. The Wake Forest transfer became the first Spartan to win the Doak Walker Award as the nation’s best running back, was The Associated Press’ Big Ten co-offensive player of the year and finished sixth in Heisman Trophy voting.

There’s no doubt Walker was the pivotal player that helped Tucker go from a 2-5 record during the pandemic-shortened 2020 season in his first year to winning 11 games and finishing No. 9 in the AP Top 25.

Walker left the program before the Peach Bowl, leaving a huge hole to fill behind a rebuilt offensive line Tucker says is “thin.”

There is no shortage of running backs motivated to make the most of the opportunity to share the carries Walker has left behind.

Wisconsin transfer Jalen Berger made a favorable early impression this spring with elusive moves that have made it it hard for the defense to bring him down.

“I’m not putting him in the hall of fame or anything,” Tucker said.. “You ask about players that have gotten better. He’s flashing."

Elijah Collins, who ran for 988 yards in 2019, and Jordon Simmons, who had 70 carries for 278 yards last season, have the most experience among returning players in the backfield.

Michigan State is returning Payton Thorne, a standout starter at quarterback, and that should help the running game by forcing defenses to respect the pass. Thorne set a single-season school record with 27 touchdown passes last year, breaking Kirk Cousins' mark, and is among the all-time leaders with 3,414 yards passing and in passing efficiency.

“We’re still going to base things starting with the run game," offensive coordinator Jay Johnson said. “We need to do that. That’s what our program is, the physicality that coach Tuck wants."