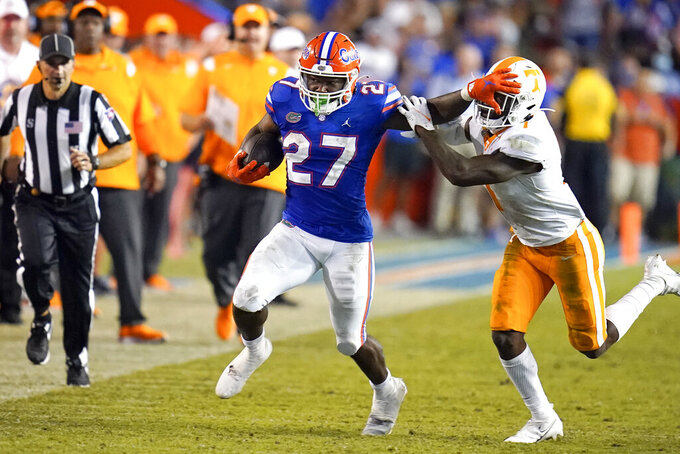 That's when Tennessee brings its fast-break offense, averaging more than three plays per minute, to Faurot Field for an important SEC game. The Vols are coming off a competitive loss to Florida while the Tigers blew their chance to pick up a solid nonconference road win against Boston College.

“It's totally different from anything we've seen this season,” Drinkwitz said. “They really do a nice job of attacking grass in space. They run the football. I think the misnomer’s that they just throw it all around the park. They really run it a lot.”

While it's probably a bit unfamiliar to Drinkwitz, who is in his second season leading the Tigers (2-2, 0-1), the Vols' prolific offense should look recognizable to Missouri fans. Tennessee coach Josh Heupel was the offensive coordinator and handled the quarterbacks for the Tigers under Barry Odom in 2016 and '17, helping Drew Lock set a slew of passing records.

Heupel left Columbia for three mostly successful seasons at Central Florida before getting the job in Knoxville.

“I think our tempo helps us,” Tennessee running backs coach Jerry Mack said. "I do think the things we do from formation variation, you’ve seen a lot more of that probably over the last couple of weeks, and I think you will see even more of it as we move on. Just always giving and presenting a different look to the defense is going to be our key.”

Especially as the Vols (2-2, 0-1) face the Tigers, who have struggled to stop just about anyone this season.

“It starts with the communication and checks,” Drinkwitz said, “making sure that all 11 people are on the same page, getting lined up. Defense is about communication. You’ve got to see the call, get in position, make sure your eyes are on your keys and then react accordingly. When somebody’s snapping the ball three plays every 60 seconds, there’s a lot of opportunities for error and they capitalize on those errors. So we’ve got to do a great job of making sure we communicate the right call.”

Heupel is 6-1 in road games coming off a loss, and he's 11-5 away from home as a head coach. But after losing to the Gators, the pressure is on to get his first SEC win to wrap up a two-game road swing before heading home to face South Carolina.

While the Vols lead the nation at 3.01 offensive plays per minute, the production hasn't always matched the speed. They are averaging 419 yards, which is 10th in the SEC and just 58th nationally. The Vols are doing better when it comes to scoring at 35.4 points a game, which is 37th overall and eighth in the SEC.

Missouri was last among Power Five teams in rush defense before heading to Boston College last week, and the Tigers proceeded to give up 275 yards rushing and three touchdowns in the 41-34 loss. That left defensive coordinator Steve Wilks searching for answers given the Vols are averaging 204.3 yards on the ground through their first four games.

Hendon Hooker has started the last two games for Tennessee with Joe Milton hurt. Hooker left the loss to Florida and was replaced late by Milton. Heupel isn’t tipping his hand on who starts at quarterback if Hooker can’t play.

”We will see where we are at during the course of the week and go from there," he said.

Ohio State transfer Mookie Cooper was supposed to provide Missouri with a downfield burner, but a foot injury sustained in fall camp has held him back. He has just 16 touches for 111 yards through four games, and he played just 11 snaps and had one touch on a jet sweep against Boston College.

“We’re working with the doctors on what’s the best approach so that he can feel comfortable and confident to just go out there and play,” Drinkwitz said. "I’ve got to trust him on where he’s at, if he’s not right.”