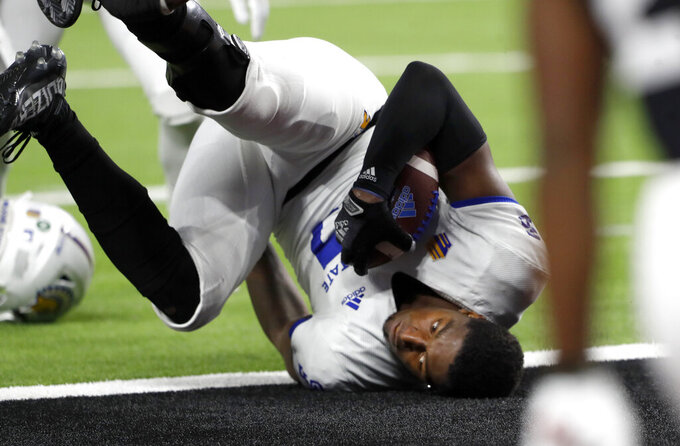 San Jose State tight end Derrick Deese Jr. (87) loses his helmet after a reception on the UNLV 1-yard line during the first half of an NCAA college football game in Las Vegas on Thursday, Oct. 21, 2021. (Steve Marcus/Las Vegas Sun via AP)

The Spartans (4-4, 2-2 Mountain West) never led until there was 7:06 remaining in the game, capping a comeback 24-3 run and then holding off UNLV's final 19-play drive until time expired. The Rebels came as close as the 11-yard line.

San Jose State, the defending Mountain West champion, had fought into a 20-20 tie a series earlier after a grinding 88-yard, 11-play drive on Tyler Neven's TD from the 10 — cutting away from would-be tacklers at the 5 — less than a minute into the fourth quarter.

The Spartans then partially blocked a 39-yard field goal attempt, foiling UNLV's attempt to retake the lead. Rebels kicker Daniel Gutierrez had hit twice earlier, including a career-long 53-yarder, extending his school-record streak of made field goals to 16.

The loss extends UNLV's losing streak to 12 games, reaching through the 2020 season. Early on, UNLV (0-7, 0-3) turned two San Jose State fumbles into short touchdown drives — from the 20 and the 18 — as the Rebels built a 17-3 lead deep into the second quarter.