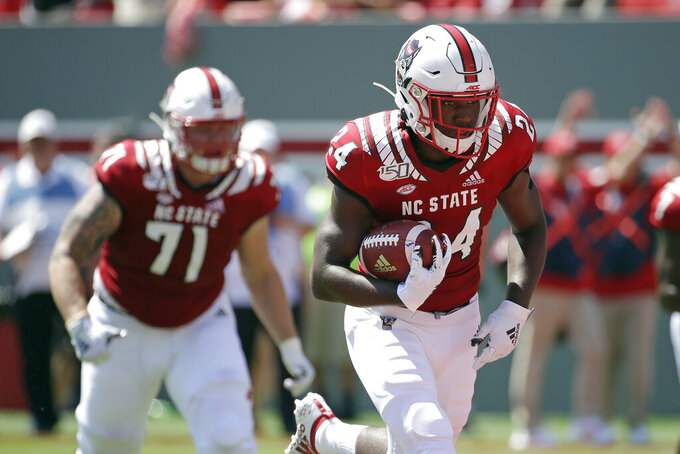 North Carolina State running back Zonovan Knight (24) runs for a touchdown during the first half of an NCAA college football game against East Carolina in Raleigh, N.C., Saturday, Aug. 31, 2019. (AP Photo/Gerry Broome)

The Wolfpack sure looked pretty good in their opener.

N.C. State looks to open 2-0 against instate opponents when the Wolfpack play host to Western Carolina (0-1) on Saturday, after opening with a 34-6 rout of East Carolina.

"I always feel like getting into that second game gives a lot of guys visuals of the things they have to do better," Doeren said. "Whether you get better or not is obviously up to your preparation in the product. That's our goal — to be better in Week 2 than we were in Week 1. ... I think it's really important in this game that we really look at ourselves, what we just put on tape and what we can do better in our second version."

The defense kept the Pirates out of the end zone in the opener — just as it did in beating ECU 58-3 in the regular-season finale. Behind first-time starting quarterback Matthew McKay, the offense rolled up 505 total yards and didn't allow a sack in that victory.

One area Doeren would like to improve is on the ground. N.C. State gained 191 yards rushing with no single player gaining more than 42. The Wolfpack used two freshmen (Zonovan Knight and Jordan Houston), redshirt freshman Trent Pennix and sophomore Ricky Person Jr.

Some other things to know about the Western Carolina-N.C. State game:

N.C. State will have to replace receiver C.J. Riley now that he's lost for the season with a torn knee ligament. He tore his left anterior cruciate ligament while covering a punt in the East Carolina victory. Riley caught 28 passes for 315 yards and two touchdowns last season and was being counted upon to help replace Kelvin Harmon and Jakobi Meyers. Freshman Devin Carter was listed as the starter on the depth chart this week.

N.C. State has won 14 straight home games against nonconference opponents. Its last loss at Carter-Finley Stadium to a non-Atlantic Coast Conference team was East Carolina, which won 42-28 in Doeren's first season in 2013.

The Wolfpack have won all six previous meetings between the programs, and none of the five matchups in the past 30 years has been closer than 25 points. N.C. State routed the Catamounts 48-7 in their last meeting in 2010.

Western Carolina defensive lineman Ezekiel Jennette started his college career at N.C. State, redshirting in 2017 before leaving to join the Catamounts last summer. The Durham native assisted on five tackles last season and did not have a tackle in Western Carolina's season-opening 49-27 loss to Mercer.