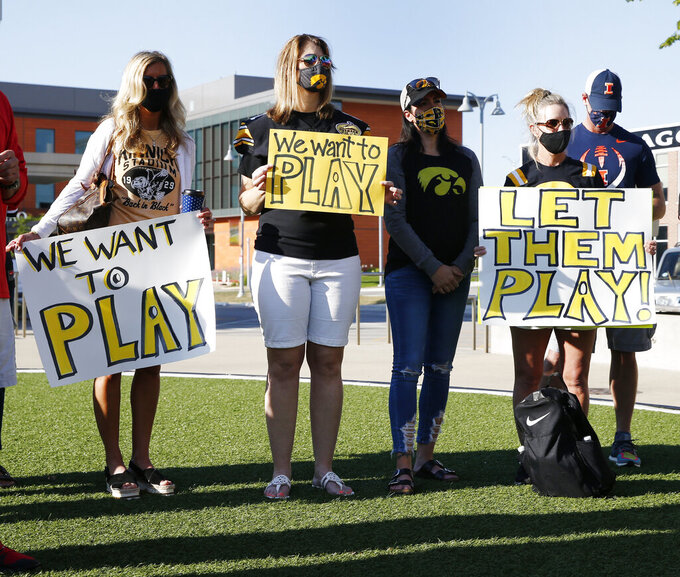 University of Iowa football players parents protest outside Big Ten headquarters in Rosemont, Ill., Friday, Aug. 21, 2020. Parents of Big Ten football players, upset over the process that led to the postponement of the season until spring, held a protest near the conference's Chicago-area headquarters Friday while an attorney in Nebraska demanded commissioner Kevin Warren turn over material illustrating how the decision was made. (Stacey Wescott/Chicago Tribune via AP)

A group of Nebraska football players filed a lawsuit Thursday, hoping a jury will force the Big Ten Conference to reinstate a fall football season.

The lawsuit in Lancaster County District Court contends, among other things, the players are losing a chance for development, exposure for a possible pro career and won't be able to market themselves to eventually capitalize on name, image and likeness revenue opportunities.

The players want a court order that would keep the Big Ten from going through with its plan to push the football season to the spring. Listed as plaintiffs are Brant and Brig Banks, Alante Brown, Noa Pola-Gates, Jackson Hannah, Garrett Nelson, Ethan Piper and Garrett Snodgrass.

“This lawsuit isn't about money or damages, it's about real-life relief,” said Mike Flood, the players' attorney.

The Big Ten said the lawsuit "has no merit and we will defend the decision to protect all student-athletes as we navigate through this global pandemic. We are actively considering options to get back to competition and look forward to doing so when it is safe to play.”

“This is a statement lawsuit. This is a catharsis lawsuit. This is a publicity lawsuit,” Feldman said. “It would be a monumental shift in how the law treats college sports if a judge declared that a conference cannot shut a season down because they thought it was unsafe to play.”

The Big Ten announced Aug. 11 it would move its football season from fall to spring because of health risks associated with the coronavirus pandemic. The Pac-12 and other smaller leagues followed suit.

The lawsuit said the Big Ten's decision-making process was “flawed and ambiguous" and called into question whether the league's Council of Presidents and Chancellors formally voted on the decision. The medical studies used to make the decision, the lawsuit says, were not relevant to the circumstances of college-age athletes and did not take into account school safety measures.

“Sadly, these student athletes have no other recourse than filing a lawsuit against their conference,” Flood said. “The presidents and chancellors of these universities have taken inconsistent positions about whether there was a vote, and they have largely failed to explain what positions they took.”

“There are procedures in place to determine if it’s safe to play. There can be legitimate disagreements about the decision,” he said. “There is not — and I don’t think should be — an avenue to second-guess those decisions. There is an avenue if they decided to play and did not adequately protect the athletes."

Feldman said he believes it would be “very difficult to prove that by choosing not to play that you have somehow harmed the athletes. Particularly when they may play in the spring.”

Last week, Flood sent a letter to commissioner Kevin Warren asking for documents relating to any votes taken, how each school voted, meeting minutes and all audio and video recordings and transcripts of meetings where votes were cast. He also wanted copies of studies, scientific data and medical information or advice considered by the presidents.

Flood had threatened a federal lawsuit if the materials weren't delivered to him.