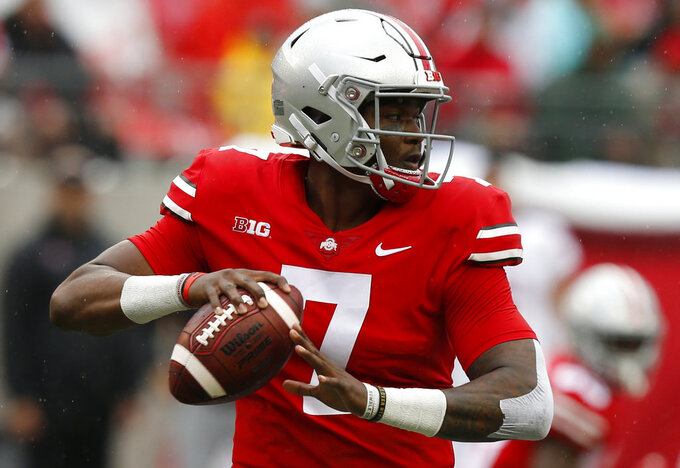 In this Sept. 8, 2018 photo Ohio State quarterback Dwayne Haskins plays against Rutgers during an NCAA college football game in Columbus, Ohio. Work-in-progress Nebraska may be the tonic for what ails No. 8 Ohio State. The Buckeyes had had a bye week to stew over the improbable Oct. 20 loss to Purdue when their running game and defense were inexplicably absent. Nebraska is improving but will come into Ohio Stadium as a four-touchdown underdog. The Huskers are led by a freshman dual-threat quarterback and senior tailback that have help revive their running game. (AP Photo/Jay LaPrete)

COLUMBUS, Ohio (AP) — The bye week has been quite unpleasant for Ohio State.

After a collapse against unranked Purdue on Oct. 20 that further exposed weaknesses in the defense and running game, the Buckeyes spent the off week stewing in the loss and trying to fix the problems enough to still try make a run at the playoffs.

The extra time off renewed discussions about the health and desire of coach Urban Meyer, who has increasingly suffered headaches because of cyst in his head.

There was a lot of work to do inside the Woody Hayes Athletic Center.

Purdue broke tackles and shredded Ohio State's defense last week. The Buckeyes had so much trouble running the ball they gave up and relied solely on the passing game behind Dwayne Haskins Jr.

The No. 8 Buckeyes (7-1, 4-1, No. 10 CFP) host Nebraska on Saturday, with the Cornhuskers coming off two straight wins after losing the first six under new coach Scott Frost. A month ago, this game looked like an easy day for the Buckeyes. Now, with the Buckeyes reeling, it could turn into another struggle.

"The time spent has been phenomenal, and the effort," Meyer said. "Now it's time to see some rewards."

Frost said he wants the Huskers (2-6, 1-4) to start fast because he knows Ohio State will be angry and ready to go.

"I foresee their team coming out and playing with their hair on fire right at the beginning," he said. "We need to be able to withstand that initial surge and play well."

Other things to look for Saturday:

With proven 1,000-yard rushers J.K. Dobbins and Mike Weber, Ohio State's lack of success on the ground is perplexing. Purdue held the Buckeyes to 76 yards rushing. Neither of the backs has had a 100-yard rushing day since Dobbins picked up 121 against TCU in week three.

Meyer said the bye week was spent working on that as well as making sure the right play is called, offensive linemen are getting a push and running backs are breaking tackles once open.

Senior Devine Ozigbo has emerged as the workhorse of the Nebraska offense. He's carried 96 times for 710 yards and eight touchdowns. In starting the past five games, he's averaging 124 yards and 9.3 yards per carry.

The Huskers are averaging 220.6 rushing yards a game, an increase of more than 110 yards from the 2017 season.

Ohio State has not punted in either of the last two games against Nebraska. While outscoring the Huskers by a combined 118-17, the Buckeyes had 20 full possessions and scored 16 touchdowns and kicked two field goals.

In last year's 56-14 win, the Buckeyes scored touchdowns on their first eight possessions and then, perhaps in an act of mercy, turned over the ball on downs on an incomplete pass at the Nebraska 20 late in the game.

In the 62-3 win in 2016, the Buckeyes had eight touchdowns and two field goals and lost a fumble in 11 possessions.

Nebraska freshman Adrian Martinez was recruited by Ohio State and hosted during his official visit by none other than Haskins.

Nebraska is looking more and more like a good fit for the dual-threat QB from Fresno, California. He's completing two-thirds of his passes and has 11 passing touchdowns. He has rushed for another 408 yards and four touchdowns.

"He's played in some tough environments," Frost said. "There's a lot of pressure on a Nebraska quarterback, I've lived that. Playing in those loud stadiums against really good teams, he's already had a chance to do that. He's going to get another chance Saturday because we're playing in a great place to play college football and a loud stadium against a really good team."

On the other sideline, Haskins has emerged as a Heisman Trophy candidate and is threatening to break the school's single-season passing records. His 30 touchdown passes lead the nation.