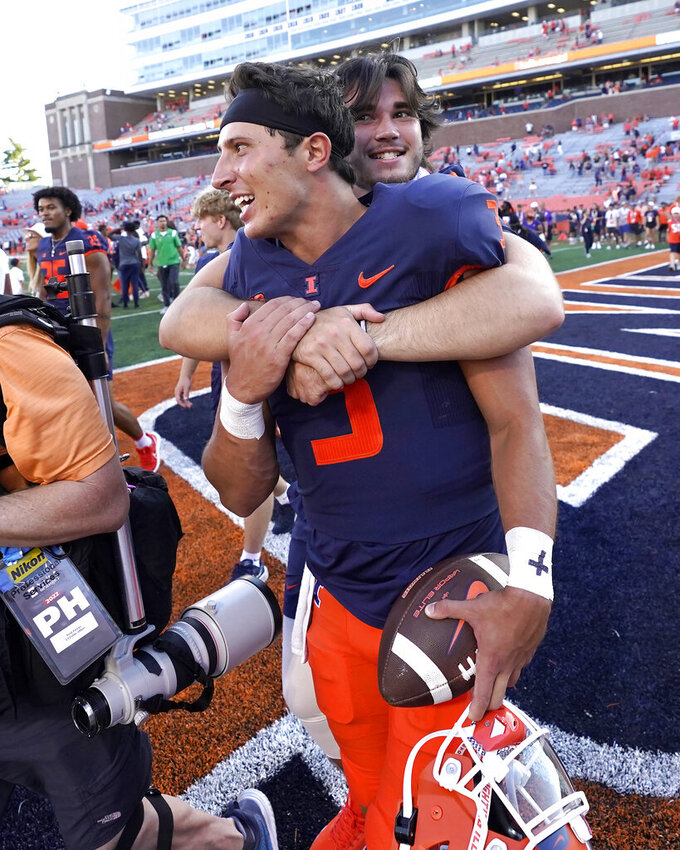 Illinois quarterback Tommy DeVito carries a game ball as he is hugged by a teammate after their win over Wyoming in an NCAA college football game Saturday, Aug. 27, 2022, in Champaign, Ill. (AP Photo/Charles Rex Arbogast)

Northwestern quarterback Ryan Hilinski looked like a different player in the season opener.

In a conference where upperclassmen and experienced starters are all the rage this season, it's the new and improved quarterbacks generating some (very) early hype and plenty of hope for teams looking to turn things around.

Not many can match the way DeVito started his first game with the Fighting Illini.

“His first handoff was a big run and his first pass was a touchdown,” Illinois coach Bret Bielema said Monday. “I think Tommy will have a significant amount of improvement in a short amount of time, not that Saturday was bad, just that he's so driven, very on task.”

Most teams crave stability at football's toughest position and there are plenty of those around the Big Ten — Sean Clifford at Penn State, Tanner Morgan at Minnesota, Aidan O'Connell at Purdue, C.J. Stroud at Ohio State and Taulia Tagovailoa at Maryland.

Even the competitions look familiar with Cade McNamara and J.J. McCarthy at Michigan and Spencer Petras and Alex Padilla at Iowa.

But a handful of schools spent the offseason trying to go in a new direction and what has been dubbed Week Zero showcased three of those.

DeVito brought a strong resume from Syracuse where he finished in the top 10 in career completions, completion percentage, passer rating, TD passes and yards passing. Then he had to beat out Artur Sitkwoski, who helped the Illini beat Penn State in nine overtimes last season.

Turns out, DeVito was worth the wait. He went 27 of 37 with 194 yards and two scores while leading Illinois to a season-opening victory over Wyoming. Illinois plays Friday night at Indiana.

“I did alright," DeVito said Saturday. “I’m a lot harder on myself than people would think. I’ll probably pull out my iPad and go look through every simple throw and every decision I made on the field.”

At least he chalked up a victory. That's the next goal for the Hoosiers, who will have another new quarterack as they try to snap an eight-game losing streak and a nine-game skid in league play.

Injuries forced Hoosiers coach Tom Allen to use four starters last season but has declined to publicly announce his opening-night starter. It could very well be Bazelak, a transfer from Missouri who is hoping to replicate DeVito's inspiring debut performance.

Bazelak was the SEC's 2020 co-freshman of the year but struggled in 2021, throwing 16 touchdown passes and 11 interceptions.

“Some new faces there, and I’m excited for those guys,” Allen said. “Anxious to see our guys go out there and compete.”

Nebraska and Northwestern also are eager to see the encores of their own starters.

A year ago, Hilinski completed 54% of his throws for 958 yards with three touchdowns and four interceptions. On Saturday in Ireland, the junior was 27 of 38 with 314 yards, two TDs and no interceptions in a 31-28 come-from-behind win over the Cornhuskers.

Coach Pat Fitzgerald didn't want to talk about the difference between last year and this, though Hilinski added some perspective to the confidence he and the Wildcats now possess.

“We didn’t flinch,” Hilinski said. "I looked at a scoreboard, I saw (us trailing) 14-3 and I was like, ‘This is great, we’re going to be just fine,’ and before you know it, I hit Ray on that big ball. He caught it, scored and then we just kept going from there.”

Even after another narrow loss, Nebraska saw the promise in Thompson, the former Texas quarterback who staked the Huskers to the early lead.

He finished 25 of 42 with 355 yards, one TD and two interceptions but wasn't happy with the result. Thompson knows he and his teammates must find a stronger finishing punch to end the frustration of so many close losses during Scott Frost's tenure.

And Thompson just might be the right man for the job.

“When I walk back into the locker room, obviously I look myself in the mirror,” Thompson said. ”I have to try to be perfect every day, every practice, every game.”