Ninth-ranked Oregon looks to rebound at home against Cal 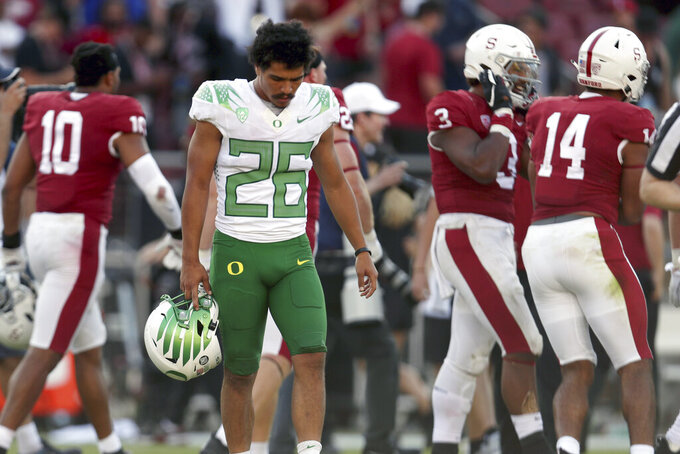 Oregon is coming off a bye week ranked No. 9, but the Ducks' last outing was an overtime loss at Stanford. The loss dealt a blow to Oregon's hopes for a spot in the playoffs, and added some pressure to win out. They'll have to do it without top running back CJ Verdell, who was injured against Stanford and is out for the season. Cal has struggled this season with just one win, against lower-tier Sacramento State. The Golden Bears are also coming off a bye following a 21-6 loss at home to Washington State.

With Verdell out, Travis Dye will lead a group of Oregon running backs. The Golden Bears rank fourth in the Pac-12 against the rush, allowing 118.2 yards a game. Dye ranks second on the Ducks with 382 yards rushing and three touchdowns this season. Cal’s D has limited three of its five opponents to under 100 yards rushing.

Cal: QB Chase Garbers has thrown for 1,245 yards and seven touchdowns. He leads the league in total offense with an average of 281.2 yards a game, and he ranks third with an average of 249 yards passing. He's had a pair of 300-yard passing games this season, both on the road.

Cal has not defeated a top-10 team on the road since 1969. ... Oregon has a 15-game winning streak at home. ... The Ducks have been ranked in the top 10 for five straight weeks. ... Oregon has a plus-11 turnover margin, tops in the Pac-12 and third in the nation. ... Cal beat the Ducks last season in Berkeley, 21-17. But Cal hasn't won in Eugene since 2007. ... Oregon leads the league with an average of 35.8 points a game. ... Cal defensive lineman Luc Bequette is in his seventh year of eligibility. He spent five seasons at Cal before transferring to Boston College last season, and back to the Golden Bears for this season.