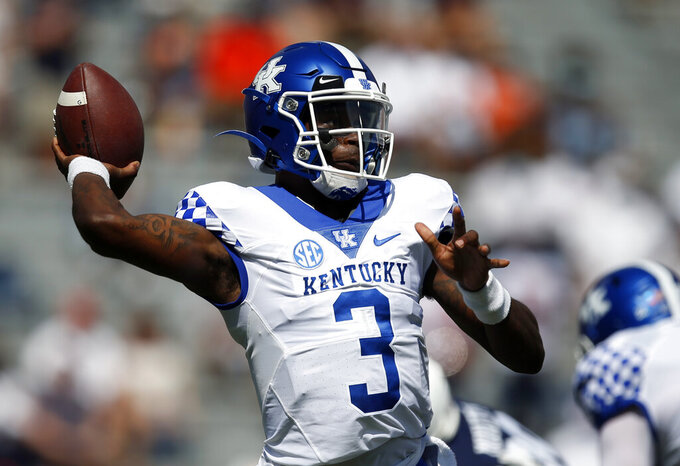 Kentucky quarterback Terry Wilson (3) throws a pass against Auburn during the first quarter of an NCAA college football game on Saturday, Sept. 26, 2020 in Auburn, Ala. (AP Photo/Butch Dill)

AUBURN, Ala. (AP) — The first half ended with both teams feeling as if they were robbed of touchdowns.

The second half was about Bo Nix, Seth Williams and Auburn's passing game.

Nix threw for 233 yards and three second-half touchdowns, including a pair to Williams, and No. 8 Auburn scored twice in the fourth quarter to pull away from No. 23 Kentucky for a 29-13 victory Saturday in the season opener.

The Tigers turned a three-quarter scare into a comfortable win by capitalizing on a late turnover and Kentucky's failed fake punt in the lone Top 25 matchup of the Southeastern Conference’s opening weekend.

“Bo made a couple of really good throws for touchdowns,” Auburn coach Gus Malzahn said. "I thought Seth Williams made two big-time plays right there to help us.

“I’m just excited for our team. It gave us a good measuring stick of where we’re at.”

The game was played before a COVID-19-limited crowd of 17,000-plus — mostly Auburn students — and the most electric moment for the sparse in-person audience was a 100-yard interception return called back by targeting just before halftime. That came right after replay officials upheld the call that Chris Rodriguez was down inside the 1.

Nix delivered some big plays to start an encore to a promising freshman season, especially to Williams. He completed 16 of 27 passes and also ran for 34 yards.

Kentucky quarterback Terry Wilson returned from a knee injury that cost him most of last season. He completed 24 of 37 passes for 239 yards and ran for 42 yards. Kavosiey Smoke ran untouched for an early 35-yard touchdown and Josh Ali caught nine passes for 98 yards.

The athletic Williams capped his six-catch, 112-yard performance with a 4-yard touchdown in the fourth quarter. He reached over 6-foot-1 cornerback Kelvin Joseph for the catch with 10:21 left.

“You got to know it’s your ball when it’s in the air,” Wiliams said.

Jamien Sherwood forced and recovered a Wilson fumble to set up a fourth-quarter score.

“I have to do a better job of holding onto the ball when I’m running," Wilson said. “But I just felt like being off a year I haven’t been hit at all. No excuses. Just have to be able to hold on to the football.”

Kentucky's offense then went nowhere, and neither did a fake punt attempt that set the table for Nix's 21-yard touchdown pass to Eli Stove.

The Wildcats cut it to 15-13 with Wilson's 8-yard touchdown to Akeem Hayes late in the third, but couldn't match Auburn's first-quarter 2-point conversion for the tie on a swinging gate play with backup quarterback Grant Loy.

“That kind of gave us a shot in the arm, kind of changed the dynamics of the game even after the scores after that,” Malzahn said.

Kentucky: Still hasn't beaten a top-10 SEC team on the road since topping No. 1 Mississippi in 1964. Wilson provided hope for the passing game after the Wildcats relied heavily on the run in his absence last season.

Auburn: Has to get better on third-down defense, giving up eight first downs on 10 Wildcats attempts in the first half. Receivers Williams and Anthony Schwartz look like the big-play threats the Tigers were expecting, but the running game has a long way to go.

The final seconds of the first half resulted in two reviews and no points, to the dismay of both teams. First, Rodriguez's stop (officially). Then Roger McCreary picked off a Wilson pass and raced 100 yards to the end zone, shedding Wilson’s tackle attempt at the 20.

But that touchdown was waved off after another review resulted in linebacker Derick Hall getting ejected for targeting along the Auburn sideline. Malzahn still called it “the play of the game.”

“They just said it was targeting,” Malzahn said. “I kind of saw it as it happened. Just by the casual eye, I thought it was a good block. But who knows? I’ll check it out.”

Auburn honored former coach Pat Dye before the game and Malzahn dressed in his honor on the sidelines, wearing Dye's trademark cap, with a short-sleeved dress shirt and tie. Dye passed away at age 80 on June 1 from complications of kidney and liver failure.

Kentucky hosts Lane Kiffin and Mississippi in its home opener on Saturday.

Auburn visits No. 4 Georgia on Saturday in a big early matchup of potential division contenders.