No. 1 Alabama and No. 4 Notre Dame move CFP clash to Texas 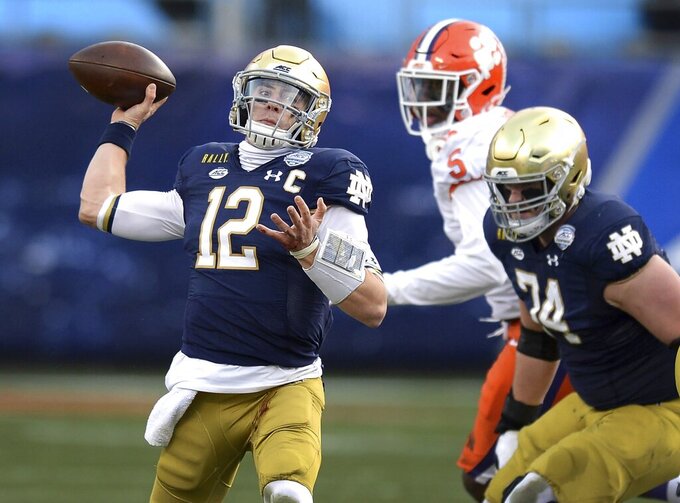 ARLINGTON, Texas (AP) — Playing a Rose Bowl game deep in the heart of Texas is anything but normal. Top-ranked Alabama being in a College Football Playoff semifinal game is nothing new.

The SEC champion Crimson Tide (11-0) are in a familiar position despite the chaos of playing during the pandemic. No. 4 Notre Dame, which finished runner-up in the ACC after temporarily giving up its cherished independent status, gets another playoff chance two years after a big thud in the same stadium.

These Irish (10-1) go into the relocated Rose Bowl on New Year's Day as three-touchdown underdogs against Alabama and the Tide's Heisman Trophy finalists, quarterback Mac Jones and receiver DeVonta Smith. The game was moved to AT&T Stadium from its traditional home in Pasadena because of COVID-19 restrictions in California that would have kept family — and any other fans — from attending.

When the Cotton Bowl at AT&T Stadium was a semifinal two years ago, Notre Dame lost 30-3 to eventual national champion Clemson in its only previous CFP appearance. The No. 2 Tigers, who avenged their only loss by beating the Irish 34-10 in the ACC title game, play Ohio State in this season's other semifinal Friday night at the Sugar Bowl.

The semifinal winners are scheduled to play Jan. 11 in suburban Miami, where eight seasons ago in the BCS national championship game Alabama trounced Notre Dame 42-14 in the last meeting between the storied programs.

“Even after going undefeated that year, we lost in the national championship game, and we were looked at as not a very good football team,” Kelly said. “We needed to look at the things that could help us grow. And we’ve been doing that each and every year.”

Notre Dame is still trying to catch up with Alabama, which is in a CFP semifinal for the sixth time after missing the final four for the only time last year. The Tide are 4-0 at the home of the NFL's Dallas Cowboys, including 38-0 over Michigan State five seasons ago on the way to a national championship. They won another title, their fifth overall under coach Nick Saban, three seasons ago.

“It means a lot to come back here reach our destination, to keep on building the standard here,” All-American cornerback Patrick Surtain II said.

“We just want to take advantage of where we’re at," said Jones, the junior who has thrown for 3,739 yards and 32 touchdowns with four interceptions in his first full season as the starter. "We’re finally where we want to be."

MISSING IN THE MIDDLE

Alabama will be without All-America center Landon Dickerson, a team captain who is recovering from surgery after injuring his knee late in the SEC title game.

“He’s been a great leader on our team and will certainly be missed,” Saban said.

Chris Owens, a senior from Arlington, Texas, will be the starting center against the Irish.

Alabama’s offense has Heisman finalists Jones and Smith, plus a big-scoring, dual-threat tailback in Najee Harris, who has rushed for 1,262 yards and 24 touchdowns, and caught 32 passes for 316 yards and three more scores.

Ian Book, a fifth-year senior and two-time captain, is Notre Dame’s winningest starting quarterback at 30-4. He has thrown for 2,601 yards and 15 TDs, with 430 yards and eight scores rushing. Sophomore running back Kyren Williams has 1,061 yards rushing with 12 TDs, and Javon McKinley has four 100-yard receiving games.

The Rose Bowl will be the second New Year's Six game played at AT&T Stadium in less than 48 hours. Oklahoma beat Florida 55-20 in the Cotton Bowl on Wednesday night, and the turnover of the stadium began almost immediately afterward. That game had a limited capacity crowd of 17,323, and the Rose Bowl attendance should be similar.

Like they would during the regular season, the Crimson Tide traveled from campus Thursday, the day before the game.

“Just going today as if this is a normal road trip for us, but certainly not a normal game for us,” Saban said.

Alabama RB Harris and Notre Dame QB Book, who grew up 90 miles from each other in Northern California, once were 7-on-7 teammates for TMP of Sacramento.

“The plan was if we were ever down, you just throw it up and Najee would go catch it. He was playing receiver for us. And he did that. That’s how we were able to win some games," Book said.

“He does an amazing job getting the ball to his playmakers," Harris said.