No. 1 Georgia puts 11-0 record on line against Georgia Tech 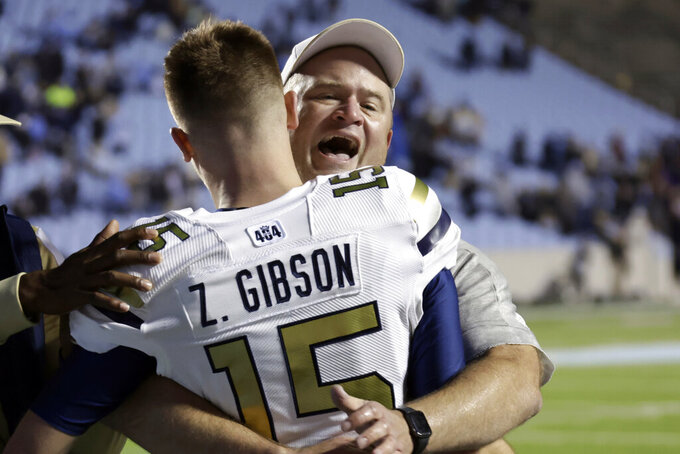 Series record: Georgia leads 69-39-5, according to its records. Georgia Tech says Georgia leads the series 69-41-5, including its wins in the 1943-44 seasons during World War II.

Georgia will play No. 6 LSU on Dec. 3 in the SEC championship game in Atlanta. The Bulldogs are looking to protect their No. 1 College Football Playoff ranking and defend their national title. Georgia Tech, which is 4-3 under interim coach Brent Key, is looking to become bowl-eligible and end a streak of four consecutive losses in the state rivalry. Georgia Tech's last bowl appearance was a 34-10 loss to Minnesota in the 2018 Quick Lane Bowl in Detroit.

Georgia Tech DE Keion White vs. Georgia offensive line. White was named the Atlantic Coast Conference defensive lineman of the week after recording three sacks and seven tackles, including four for losses, in the Yellow Jackets' 21-17 win at then-No. 13 North Carolina last week. Georgia ran for 247 yards, including a career-high 143 yards by Kenny McIntosh, but was stopped on three short-yardage situations in last week's 16-6 win at Kentucky. Georgia Tech allows 187.1 yards on the ground per game to rank 14th in the ACC and 102nd in the nation.

Georgia: TE Brock Bowers has a team-leading 625 receiving yards and is tied with WR Ladd McConkey for the team lead with four TD catches. Bowers had three catches for 100 yards and two touchdowns in last year's 45-0 rout of Georgia Tech.

Georgia has won 17 of the last 20 in the series. ... Georgia Tech's last win was a 28-27 decision in 2016, Kirby Smart's first season as Georgia's coach. ... The teams did not play in 2020 due to the coronavirus pandemic. ... Georgia Tech is looking to beat a ranked team for the third time under Key, following a 26-21 win at No. 24 Pittsburgh on Oct. 1 and last week's upset of No. 13 North Carolina. ... Under former coach Geoff Collins, who was fired on Sept. 26, the Yellow Jackets opened the season with a 41-10 loss to No. 4 Clemson and also lost 42-0 to No. 20 Mississippi. ... The Bulldogs' win over the Yellow Jackets last season tied for the largest margin of victory in the series. Georgia also won by 45 points in its 52-7 home win in 2019. ... Georgia is trying to complete its second straight undefeated regular season and sixth in school history. ... The Bulldogs have won 26 consecutive regular-season games, including 19 straight SEC regular-season games. ... Alabama (2008-09) and Florida (1995-96) are the only other SEC teams since 1992 to post back-to-back 8-0 conference records.