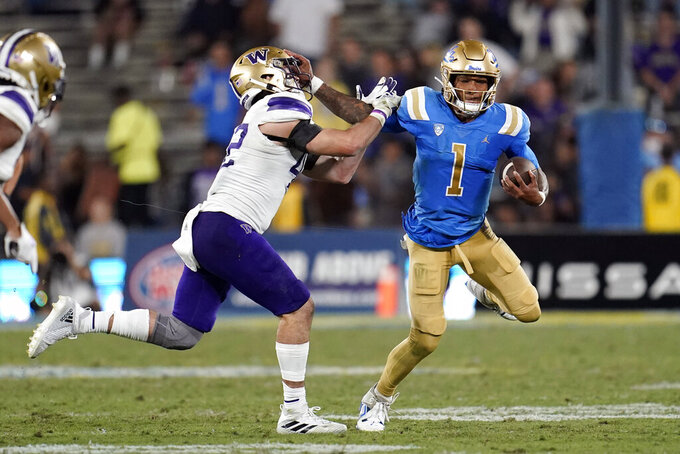 LINE: Utah by 3 1/2, according to FanDuel Sportsbook.

If the Bruins are truly contenders to win the Pac-12 title and reach the College Football Playoff, they’ll need to prove it against the Utes. Utah, which has bounced back impressively following the Week 1 loss at Florida, has won the past five meetings by an average of 27 points per game. With the top two offenses in a Pac-12 that no longer has divisions, it could be the first of two games this season between Utah and UCLA.

UCLA WR Jake Bobo vs. Utah CB Clark Phillips III. Bobo, a fifth-year senior transfer from Duke, has quickly settled in as the top option in the passing game for the Bruins. He had six receptions for 142 yards and two touchdowns in the 40-32 win over Washington, but will face a daunting challenge from one of the best defenders in college football. Phillips had three interceptions against Oregon State, returning one 38 yards for a touchdown, and is now up to four picks in two conference games.

Utah: RB Tavion Thomas. After being named first-team All-Pac-12 with 1,108 yards rushing and 21 touchdowns last season, Thomas has struggled to make a difference to start conference play this year. He has just 73 yards on 17 carries and was replaced in the starting lineup against the Beavers by freshman Jaylon Glover. But Thomas dominated the Bruins with 160 yards and four touchdowns in 2021, so this could be the right opponent for him to get on track.

UCLA: RB Zach Charbonnet. He has been a catalyst for the Bruins during their eight-game win streak, rushing for 757 yards and 10 touchdowns, and if he is effective Saturday it will keep Utah from truly unleashing its pass rush. UCLA is 10-0 all-time when Charbonnet, who had 11 carries for 65 yards and a touchdown in Salt Lake City last year, runs for at least 100 yards.

UCLA’s eight-game win streak is tied with Coastal Carolina for the second-longest in the FBS, trailing only Clemson (11). ... Utah has eight players with at least 2 1/2 tackles for loss this season, with LB Mohamoud Diabate (4) leading the team. ... Bruins QB Dorian Thompson-Robinson needs four touchdown passes to pass Brett Hundley (75) for most in school history. ... Utes LT Braeden Daniels has started 34 career games. ... UCLA LB Laiatu Latu has four sacks and one forced fumble in his past two games. ... The Utes have seven takeaways (six interceptions, one fumble recovery) in two Pac-12 games. ... The Bruins defense has allowed 12 scores in 13 red-zone possessions this season (nine touchdowns, three field goals), including five touchdowns and one field goal on six drives in Pac-12 play. ... Utah has won three straight road games against UCLA.