No. 12 Badgers eager to show offense is back vs Penn State 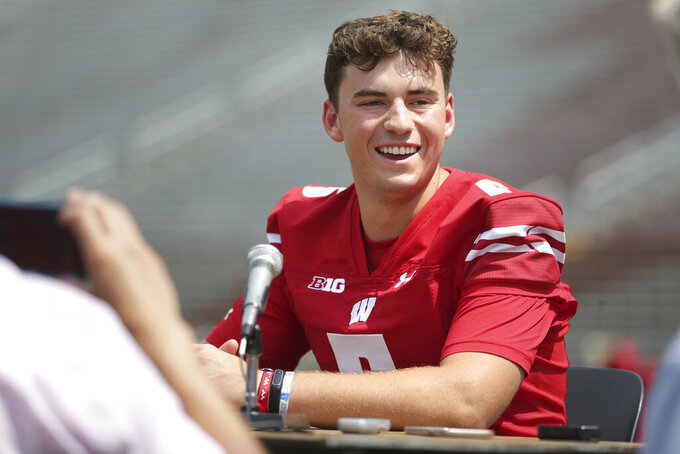 FILE - Wisconsin quarterback Graham Mertz is interviewed during the team's NCAA college football media day at Camp Randall Stadium in Madison, Wis., in this Thursday, Aug. 5, 2021, file photo. Mertz and the Wisconsin Badgers are eager to show how far they’ve come since a disappointing 2020 season that ended with a 4-3 record. They’ll get a chance to showcase that Saturday with a tough season-opening test against No. 19 Penn State. (Kayla Wolf/Wisconsin State Journal via AP, File)

MADISON, Wis. (AP) — Wisconsin has plenty of reasons to believe its offense will bounce back from its ineffective 2020 performance.

The Badgers still must prove those changes have made them more productive. That opportunity comes Saturday when the 12th-ranked Badgers try to win a 26th straight home opener as they host No. 19 Penn State.

“We’re very excited to come out and showcase what this offense is going to be this year,” Pryor said Monday. “You kind of got a glimpse of it the first game (last year) when me and Danny were healthy.”

Wisconsin’s first game last year was a 45-7 blowout of Illinois that featured Mertz going 20 of 21 and throwing five touchdown passes in his college debut.

That game was more of an aberration than a trend-setter: The Badgers finished 4-3 and averaged 25.1 points per game, their lowest since 2004. Wisconsin scored a total of 20 points during a three-game skid and didn’t exceed seven points in any of those losses.

That defense is good enough to help Wisconsin contend for a Big Ten title if the Badgers’ offense improves.

Chryst has made himself the chief play caller this year after handing off those responsibilities last season to Joe Rudolph, who has shifted from offensive coordinator to offensive line coach. Chryst also took over as quarterbacks coach after Jon Budmayr, who had filled that role from 2018-20, left to become Colorado State’s offensive coordinator.

Mertz says he appreciates having more direct contact with Chryst, who also coached quarterbacks from 2015-17 during his first three seasons as head coach in Madison.

“We just had those extra one-on-one meetings where it’s just him and I talking through, ‘All right, what do we like? What do we not like? What do we need to change?’” Mertz said. “For me, it’s been awesome just to work with the head coach one-on-one and really just form the offense that we want to be and how we see it playing out. It’s been a great offseason working with him and just figuring out what we want to be on the field.”

The offense should benefit from some new energy.

Mellusi, who rushed for a combined 427 yards and six touchdowns as a Clemson backup from 2019-20, performed well enough for Wisconsin in training camp to open the season as the Badgers’ first-team running back. Chryst said it remains uncertain how Wisconsin will divide the carries among the running backs.

“He’s been really consistent,” Chryst said. “That, I think, means a lot.”

“That word ‘mauler’ describes every single one of those guys in that entire room,” Mertz said.

How much the offense improves could depend on Mertz most of all.

After his huge performance against Illinois last year, Mertz threw five interceptions and four touchdown passes the rest of the season. He was hurt by the fact Pryor played only three games and Davis appeared in just two games due to injuries.

Now that he has all his weapons, Mertz is eager to show what this offense can do.

“I’m just going to go out there and try to win as many games as possible and have as much fun as possible,” Mertz said. “That’s my game plan for it.”