No. 12 Wisconsin opens season by hosting No. 19 Penn State 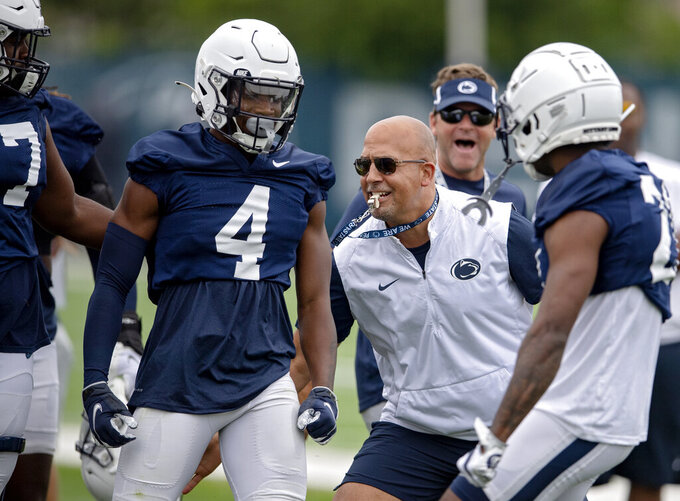 Line: Wisconsin by 5 1/2, according to FanDuel Sportsbook.

Penn State is aiming to beat Wisconsin for a fifth straight time. Wisconsin’s last victory in the series was a 45-7 blowout at Madison in 2011. Wisconsin is seeking to win a home opener for the 26th consecutive season, which ties Oklahoma for the second-longest such streak among Football Bowl Subdivision programs. Florida has won 31 straight home openers. Penn State wants to start this season off right after losing its first five games last year.

Penn State: RB Noah Cain: After rushing for eight touchdowns as a freshman in 2019, Cain suffered a leg injury on Penn State’s opening drive last year and didn’t play the rest of the season. Cain is healthy now and eager to pick up where he left off two years ago, when he ran for over 100 yards against Purdue and Iowa and gained 92 yards in a Cotton Bowl triumph over Memphis.

Wisconsin: QB Graham Mertz: Penn State can only hope Mertz doesn’t stage a repeat of his 2020 season-opening performance, when he went 20 of 21 and threw five touchdown passes in a 45-7 rout of Illinois. Mertz threw five interceptions and four touchdown passes the remainder of the 2020 season but should benefit from the return of wide receivers Danny Davis and Kendric Pryor, who played a combined five games last year due to injuries.

Both teams are attempting to bounce back from disappointing seasons. Wisconsin went 4-3 and Penn State was 4-5, though the Badgers won their last two games and the Nittany Lions finished with four straight victories. … Although Wisconsin has won its last 25 home openers, the Badgers are just 4-5 when they open the home schedule against a Big Ten team. … This is the first time Wisconsin has played a ranked Big Ten team in its season opener since 1981, when the Badgers stunned top-ranked Michigan 21-14.