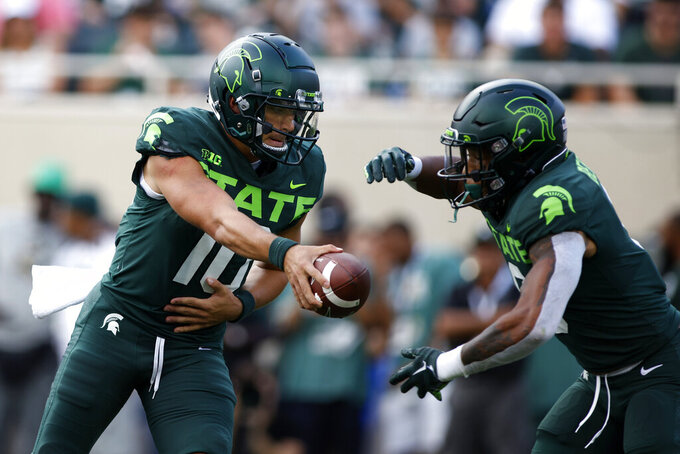 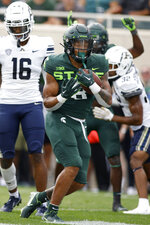 It was the largest margin of victory for Michigan State (2-0) since beating Eastern Michigan by 59 points in 2014.

“Our focus was better, our intensity throughout was better," Michigan State coach Mel Tucker said. "There was a lot of good things for us to build upon with our team in all three phases. And we have some things to clean up if we expect to go on the road and get anything done.”

Kendell Brooks, filling in for injured starting safety Xavier Henderson, forced the ball out twice in the first quarter. He has forced three fumbles in the Spartans' first two games.

“KB, he's getting better,” Tucker said. “We have confidence in him to go in the game and get the job done and make plays and be physical and knock the ball off people. I think as he gains more experience he's going to continue to get better. That's good when guys can go in, execute and make plays.”

On Akron’s opening drive, the senior safety knocked the ball loose from tight end TJ Banks and linebacker Cal Haladay picked up the ball and ran 22 yards to the Michigan State 41. Six plays later, Jarek Broussard scored on a 1-yard run. Haladay later forced a fumble in the second half when he sacked backup quarterback Jeff Undercuffler.

“I was just reading my keys,” said Brooks who was making his first career start at Michigan State. “It was cover 3 so I was reading the quarterback. I saw him take his hand off the ball and throw. So I kind of just broke and I glanced over to the tight end to see where he was throwing, and I just ran through contact.”

Brooks also punched the ball out from receiver Shocky Jacques-Louis, leading to a 1-yard touchdown run by Berger.

Jacoby Windmon, who had four sacks against Western Michigan last week and another one and vs. Akron, forced his second fumble in two games when he pounced on a bobbled pitch to Jonzell Norrils and Berger followed with his second score on another 1-yard run.

The Spartans continued the scoring in the second half with a 16-yard touchdown pass from backup quarterback Noah Kim to Tre Mosley, 2-yard touchdown runs by Broussard and Berger, and a 1-yard run by Elijah Collins.

Broussard said he doesn't mind sharing the workload with Berger. In addition to the five touchdowns, the pair accounted for 188 of Michigan State's 260 rushing yards.

“I feel like we complement each other really well running the ball,” Broussard said. "There’s no drop-off from my point of view.”

Akron coach Joe Moorhead said the turnovers killed any hope of pulling off an upset.

“Can't turn it over once against a team like this, let alone four times and expect to win,” he said. “You can't put your defense in adverse situations like that. Two or three of the turnovers resulted in scores for the other team. ... You can't let a team like Michigan State that's big and physical get extra possessions and wear you down.”

Akron (1-1) starting quarterback DJ Irons was knocked out of the game with just over six minutes left in the first half. The Big Ten Network broadcast reported that he was taken to a hospital with a lower body injury. Moorhead did not have an update on Irons' condition after the game.

Michigan State’s leading receiver Jayden Reed suffered a cut on his back late in the first half when he was pushed out of bounds and was held out of the second half.

Michigan State has now won eight straight home games and also 14 straight games against Mid-American Conference teams. The last loss was to a MAC foe was to Central Michigan in 2009.

Akron: With Irons knocked out of the game after completing 9 of 13 passes for 123 yards and running for 31 yards, the Zips could not move the ball much.

Michigan State: Even though he completed 18 of 28 passes for 212 yards, quarterback Payton Thorne continued to miss open receivers for the second straight game and threw two interceptions.

The Spartans were expected to win convincingly against the Zips and may actually move up slightly in the poll.

Michigan State: Goes on the road Sept. 17 to play Washington and hosts Minnesota on Sept. 24 in both teams’ Big Ten openers.