No. 15 North Carolina looks to flip the script vs Virginia 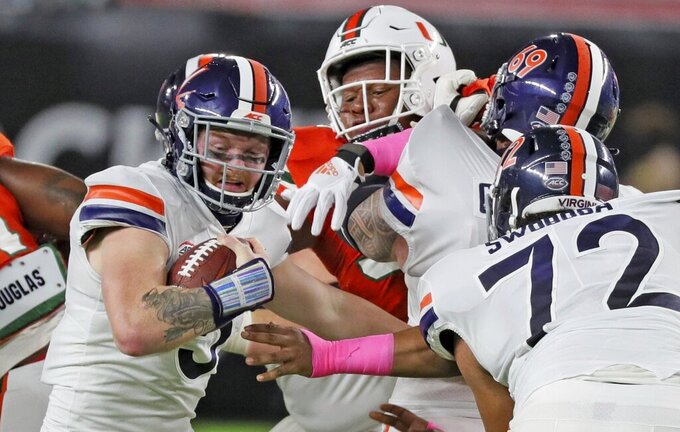 No. 15 North Carolina is hoping to turn things around this time in its matchup with Virginia.

The Tar Heels have lost three straight to the Cavaliers and coach Mack Brown is just 3-8 in the Atlantic Coast Conference series with the defending Coastal Division champions.

But the slumping Cavaliers (1-4, 1-4 Atlantic Coast Conference) are struggling under fifth-year coach Bronco Mendenhall while the Tar Heels are thriving since Brown gave up his spot in a broadcast booth to lead UNC for a second time.

The Tar Heels (4-1, 4-1) have a pick-your-poison offense led by quarterback Sam Howell, who averages 280 passing yards and two touchdown throws per game. Their ground game is powered by the running back tandem of Michael Carter and Javonte Williams, who each run for more than 110 yards a contest.

North Carolina is coming off a 48-21 win against then-ranked rival North Carolina State. They have won seven of eight since losing to Virginia and Pittsburgh last November, the only loss was being upset at Florida State on Oct. 17. Before being upended, the Tar Heels had climbed to No. 5 in the Top 25, their highest ranking since 1997 during Brown’s first coaching stint.

“This time last year we were 2-3,” Brown said. “So we’re sitting here at 4-1 and getting better, and that shows progress in our program. And that’s what we want to do.”

The Cavaliers had been making steady progress under Mendenhall until this year. Slow starts have put forced Virginia to have to play from behind. The Cavaliers have been outscored 55-10 in the first quarter and have never scored first.

Mendenhall, though, believes his team's winning attitude remains strong, even if the outcomes have not been what they've been accustomed to during his tenure.

“I’m really, really encouraged and proud of them because this is kind of uncharted territory for a group of guys that’s won a lot in the past three years and had expected to and now it’s, it’s been ‘well, this isn’t what we expected,'” Mendenhall said this week.

Some other things to watch when North Carolina visits Virginia:

Much of the attention UNC’s offense received entering the season focused on the return of quarterback Sam Howell, but it’s been the ground game that has stood out for the Tar Heels. Running backs Michael Carter and Javonte Williams are the only teammates in the country each averaging 100 yards rushing among teams that have played multiple games, with Carter ranking 11th in the Bowl Subdivision (116.8) and Williams 14th (112.4).

The Tar Heels average 249 rushing yards and are at their best when they’re running the ball well, which only makes things easier on Howell in a prolific passing game.

The return of Brennan Armstrong from a concussion was big lift for Virginia is its 19-14 loss at No. 12 Miami. The lefthanded quarterback had missed more than six quarters in the concussion protocol after a targeting injury against N.C. State.

“We’re a different team with Brennan. The throws he can make, how tough he is when he scrambles, just his leadership style,” Mendenhall said. “... He makes a difference for us, even though it hasn’t shown on the outcome yet.”

UNC is looking for consistent kicking from Grayson Atkins, an AP All-American in the Football Championship Subdivision last year at Furman. He's made just 4 of 8 field goal tries and plunked the left upright on a 22-yard attempt against N.C. State. Virginia’s Brian Delaney set a school record by making 17 in a row before missing one at Wake Forest.

The Tar Heels would love a repeat of last year from receiver Dyami Brown. He had a career-high 202 yards and three touchdowns in the home loss to Virginia, with all three scores spanning at least 34 yards. He’s coming of a 105-yard day against N.C. State that included a career-best seven receptions.

The crowd at Virginia will again be limited to 1,000 people per team, which means the home field edge will come from piped in music and familial support.