No. 17 Arkansas in rare role of favorite vs. Auburn 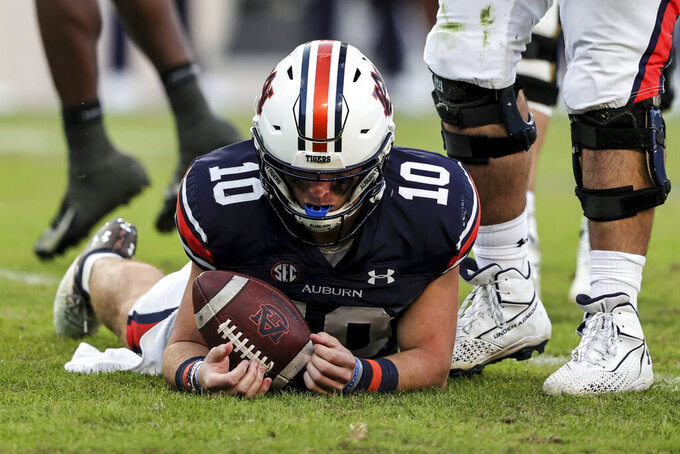 Auburn quarterback Bo Nix (10) lies on the ground after a sack during the second half of an NCAA college football game against Georgia Saturday, Oct. 9, 2021, in Auburn, Ala. (AP Photo/Butch Dill)

Line: Arkansas by 4 1/2, according to FanDuel Sportsbook.

Both teams are looking to rebound from tough losses. For No. 17 Arkansas, they enter after back-to-back losses to Georgia and Ole Miss. Auburn fell to Georgia 34-10 last week. This is the first home game for Arkansas since Sept. 18.

Auburn: RB Tank Bigsby. He has been a workhorse for the Tigers for two seasons. In last year’s 30-28 win against the Razorbacks, he rushed for 146 yards and had two 17-yard runs on Auburn’s late game-winning drive that set up Anders Carlson’s 39-yard field goal at the end of the game.

Arkansas: WR Treylon Burks. He has three 100-yard receiving games this season, including last week against Ole Miss, when he caught seven passes for 136 yards and a touchdown. Burks leads the team with 29 catches for 519 yards and three touchdowns. He has caught at least one pass in 26 straight games.

Auburn has won five straight in this SEC West series, and four of those were by wide margins until last season’s two-point win. Arkansas’ last win came in 2015, a 54-46 four-overtime game in Fayetteville. … Burks ranks second in the SEC in receiving yards this season with 519. … The Razorbacks have 54 rushing plays of 10 yards or more, which ranks second nationally. … The Razorbacks have a trio of linebackers with 50-plus tackles, led by Bumper Pool with a team-high 61. … Auburn’s Eku Leota has six tackles-for-loss and four sacks.