No. 18 Iowa clings to West hopes entering game with Illini 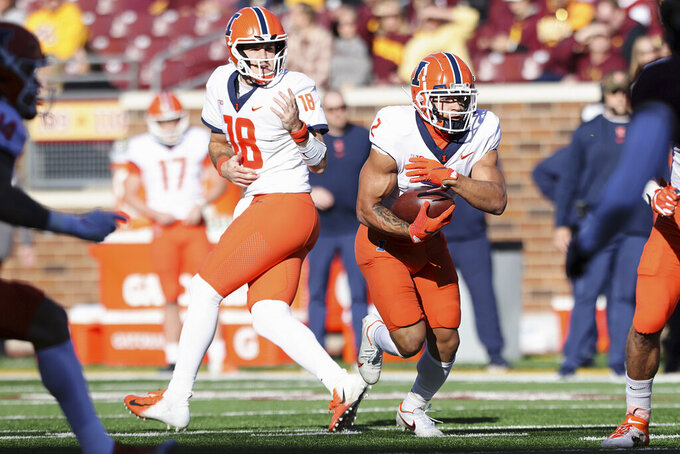 Illinois running back Chase Brown (2) carries the ball against Minnesota during the first half of an NCAA college football game Saturday, Nov. 6, 2021, in Minneapolis. Illinois won 14-6. (AP Photo/Stacy Bengs)

The Hawkeyes' hopes of winning the Big Ten West are faint, but a loss here would end them. Iowa is going for a third straight win after dropping back-to-back games in October. Illinois hasn't won in Iowa City since 1999. The Illini, who end the regular season against Northwestern at home, still have a chance to get to 6-6 and make a bowl in Bret Bielema's first year.

Illinois RB Chase Brown vs. Iowa defense. Brown ran for at least 145 yards in each of his last two road games. A similar performance probably would give the Illini a chance. The Hawkeyes are allowing just 3 yards per rushing attempt but have allowed a 100-yard rusher in two of their last three games.

Illinois: S Kerby Joseph is the only player in the nation — and only Big Ten player in the last five years — with at least four interceptions and three fumble recoveries. He's in the top-five nationally in both categories.

Iowa: WR Charlie Jones had his first career 100-yard game against Minnesota last week, including a 72-yard touchdown. He also averages 10.4 yards on punt returns to lead the Big Ten, and he's fourth in the conference with his 22.9-yard kick return average.

Illinois coach Bret Bielema tested positive for COVID-19 on Monday night and will not be at the game. Assistant head coach George McDonald will be in charge. ... Illini defensive coordinator Ryan Walters was given a contract extension Sunday. The Illini are giving up an average of 13.3 fewer points per game, the program's best improvement since 1963. ... LB Jack Campbell became the first Iowa player since Josey Jewell in 2017 to record 100 tackles in a season. Campbell had 17 last week against Minnesota. ... Iowa will honor 17 seniors who will be playing their final game at Kinnick Stadium. The senior class has an overall record of 33-11 and played in a bowl each year since 2018.