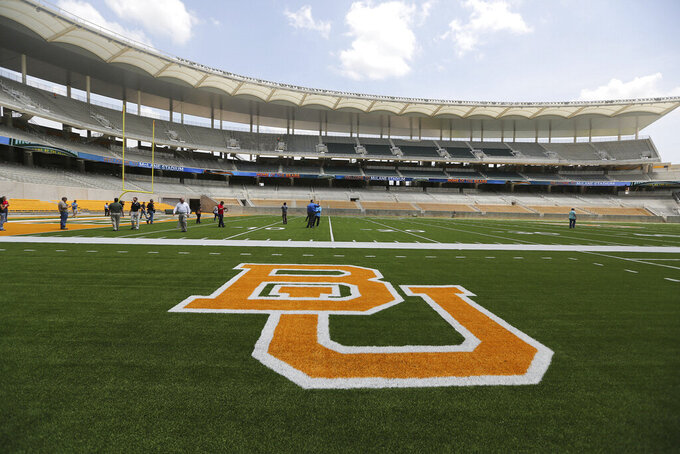 FILE - This Aug. 18, 2014 file photo shows the Baylor University logo on the football field at McLane Stadium in Waco, Texas. BYU coach Kalani Sitake knows his players are looking forward to the change of scenery, the chance to try some different foods and a game in a different region of the country. What nobody knew when this trip was scheduled more than five years ago, or even before this season started, was that Saturday's game at Baylor would provide the 19th-ranked Cougars a sneak peek of their new conference home. (Rod Aydelotte/Waco Tribune-Herald via AP, File)

BYU coach Kalani Sitake knows his players are looking forward to the change of scenery, the chance to try some different foods and a game in a different region of the country.

What nobody knew when this trip was scheduled more than five years ago, or even before this season started, was that Saturday's game at Baylor would be a sneak peek for the 19th-ranked Cougars of their new conference.

“This could probably be a future rivalry,” BYU junior receiver Gunner Romney said. “I'm excited to go and get a little bit of the taste of what it’s like there.”

The Cougars (5-1), who have played as a football independent since 2011, last month accepted an invitation to join the Big 12 and will begin play in the conference in two seasons.

“Glad that we get to have an earlier version of it this week,” said Sitake, the former BYU running back now in his sixth year as head coach.

Trips to Waco, Texas, and even farther east from their campus in Provo, Utah, won't be random for the Cougars once they officially join the changing Big 12 in 2023.

A trio of American Athletic Conference teams — third-ranked Cincinnati, Central Florida and Houston — are also coming into the Big 12 by 2024, and possibly a year earlier. Fourth-ranked Oklahoma and No. 25 Texas, the only Big 12 teams to win national championships since the league started in 1996, will depart for the Southeastern Conference no later than 2025.

Baylor, the world's largest Baptist university, was a charter member of the Big 12. BYU, the largest Mormon-affiliated school, hasn't played a conference game since the end of a 12-season run in the Mountain West after the 2010 season. The Cougars previously spent 37 seasons in the Western Athletic Conference.

Their last meeting was during BYU's undefeated national championship season in 1984. Baylor had beaten the Cougars in the 1983 season opener in Waco before BYU won its next 25 games.

This is the first game matching one of the future Big 12 members against one of the current schools since their official invitations last month. Those came the week after Houston lost to Texas Tech in a season opener.

Before becoming conference foes, Baylor is set for the return game of the home-and-home series against BYU next September. The Cougars also have what is currently a non-conference game set at UCF in 2023, though they could both be in the Big 12 by then. Houston is scheduled to play at Texas Tech again next season, and has games slated against Kansas in 2022 and 2023.

Asked about the opportunity Saturday to make a first impression in the Big 12 region, Sitake said he was more concerned about making sure that his team plays fundamentally sound after having four turnovers in a 26-17 loss to Boise State last weekend.

“We’re a much better team when we can limit our mistakes,” Sitake said. “But we’re going to come in there, we’re excited to play the game, we’re really looking forward to the matchup. And I think we bring a unique brand of football. But you know, we’re going to have a lot of fun playing with sportsmanship and class and embracing the opportunity to be in there in front of that fan base. And we have a lot of friends that are on that coaching staff. So it’s going to be a fun day.”

Along with the preview of the Big 12 comes a reunion with offensive coordinator Jeff Grimes and offensive line coach Eric Mateos, both in their first season since leaving BYU to join Baylor coach Dave Aranda's staff. Aranda was once the defensive coordinator at Southern Utah for Ed Lamb, now the assistant head coach of the Cougars.

“Professionally, you want to look at as a next game. I mean, obviously that’s what you want to do. You want to just move on and just play the game and then treat it as such,” Sitake said. “But hard to do when you love the individuals that are there that you became really close friends and brothers with for us. ... It’s going to be different that way. But we want to win. I know they do, too.”