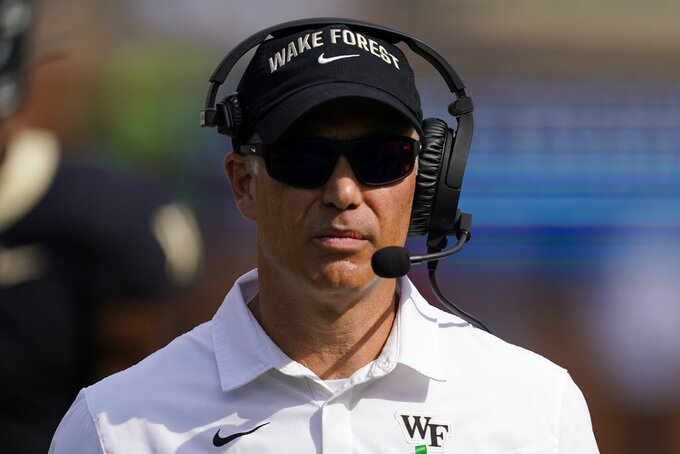 WINSTON-SALEM, N.C. (AP) — Justice Ellison knows the deal. Every time he gets a carry in a practice or a game for No. 19 Wake Forest, he had better be “chinning” the football or he’ll won’t get the next one.

“It just means having the ball (pressed) across your chest,” the running back said. “Literally almost touching your chin as you run.”

That protect-the-football emphasis is a critical piece in a larger philosophy for Dave Clawson’s program. It’s about avoiding self-inflicted mistakes that only make things tougher for a roster that relies on developing less-heralded prospects instead of loading up on five-star recruits.

The approach has brought the Demon Deacons to this point: sitting as the Atlantic Coast Conference’s highest-ranked team and within reach of the program’s best start in nearly eight decades.

“I think it’s very hard for us to ever win at Wake Forest unless we play that way,” Clawson said. “So valuing the football, not turning it over, teaching techniques of trying to strip it and ball disruption and those types of things -- I mean, that just has to be a way of life for us.

“And not beating ourselves.”

They join No. 23 North Carolina State as the only teams controlling their own destiny in the Atlantic Division to dethrone struggling six-time reigning league champion Clemson and earn the division winner’s ticket to the league championship game.

Wake Forest has the league's No. 2 offense by averaging 38.4 points, while its defense is tied for second for most sacks. But the smaller details are just as vital, namely in how the Demon Deacons avoid turnovers and bad penalties that would put them behind the chains on offense or constantly force the defense to defend a short field.

Coaches everywhere talk about avoiding mistakes. The Demon Deacons, with a veteran roster featuring older players, regularly lives up to that goal.

“Really I think it’s just everyone doing your job, no one being a hero,” offensive lineman Sean Maginn said.

It starts with ball security, so much so that there’s a large sign in the back of a team meeting room on campus proclaiming: “The ball is the program.”

“If they don’t carry it the way we want, they are not going to play,” Clawson said, “simple as that.”

Ellison, a second-year freshman, said it didn’t take long to figure out. He had to shake a high-school habit of holding the ball low and away from his body, but learned quickly when running backs coach John Hunter would make him redo practice drills for not holding the ball correctly.

“When you’re in the open field, you’re allowed to rock it,” Ellison said. “But when you get in contact, you’ve got to squeeze it together because you’ve got people hitting from all (parts) of the field. … These guys, they’re coming at you with a full head of steam and they’re not worried about no targeting call or anything. So it’s just very important that you protect the football at all costs.”

Wake Forest has lost two fumbles and three interceptions in five games compared to forcing six fumbles and seven interceptions. That plus-8 turnover margin ranks eighth in the Bowl Subdivision ranks and third for all power-conference teams, trailing only No. 3 Iowa (plus-12) and No. 8 Oregon (plus-11).

Last year’s Demon Deacons had just one turnover through the first seven games and finished eighth (plus-10) in FBS, and they have finished in the top 25 nationally four times during their current five-year bowl streak.

They could accomplish a lot more if they extend that run this year.

"It's just about locking in, everybody buying into the system," Ellison said. “I think that's what's been the biggest impact, the difference between us and other schools. We really have focused on: ‘OK, we’ve got to do this to separate ourselves from everybody else.'"