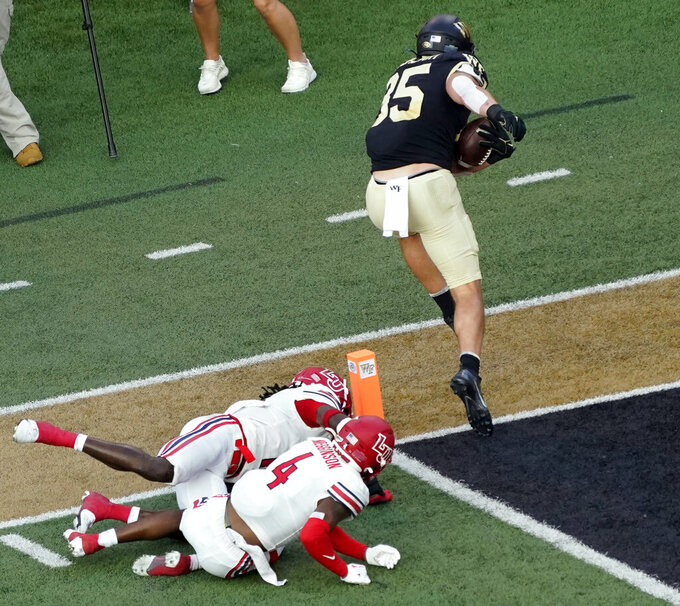 Wake Forest tight end Blake Whiteheart (85) runs into the end zone for a touchdown after a catch against Liberty during the first half of an NCAA college football game in Winston-Salem, N.C., Saturday, Sept. 17, 2022. (AP Photo/Chuck Burton)

The Demon Deacons’ ground game was ineffective — 21 rushing yards on 26 attempts — so they turned to defense and a passing game, with quarterback Sam Hartman throwing for 325 yards and three touchdowns with two interceptions.

Hartman became the career passing leader for Wake Forest (3-0) with more than 9,700 yards.

Liberty (2-1) pulled within a single point on a late 18-yard, fourth-down touchdown grab by Demario Douglas, who jumped high and took the ball away from two Wake defenders in the end zone. But Yarbrough was cut off by several defenders as he ran for the right corner on the two-point try.

The second half turned out to be a shootout, pitting Hartman against elusive Liberty quarterback Kaidon Salter, a former Tennessee recruit. The winning point was provided on Matthew Dennis’ extra point after a 1-yard touchdown run from Justice Ellison with 3:39 left.

The Deacons made three first-half interceptions en route to a 20-8 halftime lead, despite rushing for only one yard and yielding a safety on a blocked punt.

The Flames took their first lead on a 43-yard run Dae Dae Hunter, who escaped the grasp of one defender and raced down the middle of the field. A two-point pass put Liberty in front 23-20 less than five minutes into the second half.

“In a lot of ways, they outplayed us,” Clawson said. “We just made so many mistakes.”

Salter ran for 77 yards and one TD and passed for 192 with two TDs, often scrambling to buy extra time to throw.

Hartman said he knows he’ll have to be sharper in next Saturday’s nationally televised game against Clemson, the program that had won six straight ACC titles prior to the Deacons winning the division last year.

“The past is the past,” Hartman said. “We have to move to the future.”

Liberty: Liberty was riding momentum with a 23-20 lead in the final minute of the third quarter and had Wake pinned deep after sacking Hartman. But an unnecessary roughness call – the replay didn’t show much extra contact on the sack — gave Wake new life. The Deacons converted a fourth-down pass near midfield. Later in the drive, a Liberty interception was negated by a defensive holding call. The drive ended in Dennis’ 46-yard, tying field goal.

Wake Forest: The Deacons struggled on offense, especially in the running game, a source for worry with No. 5 Clemson next on the schedule. Wake, which averaged 181 yards rushing in victories over VMI and Vanderbilt, netted a single yard on its 10 first-half carries. Liberty shut down Wake’s read-option running attack. The Deacons had only one run of more than six yards, a 13-yard Hartman scramble.

Liberty coach Hugh Freeze, known since his days at Ole Miss for taking chances on fourth down, took one early against Wake and paid a price. A fourth-and-2 gamble was stopped near midfield, setting up Wake’s first field goal.

When the Flames took their first lead early in the third quarter, Freeze called for a two-point conversion try that resulted in a successful pass and a 23-20 Liberty lead.

The final gamble, choosing to opt for a two-point play rather than likely overtime, came up empty.

Clawson said he wasn’t surprised Freeze decided not to play for overtime: “You’re on the road, you’re a road (under)dog, you go for two.”

Wake Forest: Hosts No. 5 Clemson in its ACC opener.