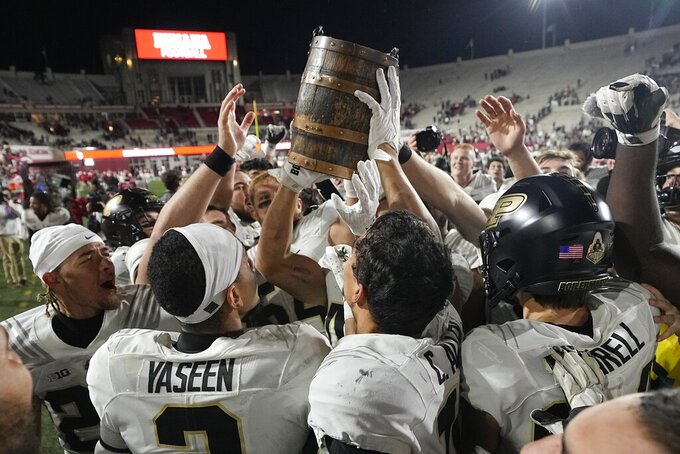 On Saturday, the Wolverines return to Indianapolis with even bigger aspirations.

They can win back-to-back conference titles for the first time since 2003-04, break the single-season school record with win No. 13 and clinch a second straight playoff bid. But for No. 2 Michigan, the motivation comes from another place.

“We’re earning all the accolades we’re receiving, and we deserve to be in the discussion for who the best team in the nation is,” said Michigan cornerback Mike Sainristil, a converted receiver. “The drive this team has is unmatched and I think it's going to help us reach the level we want.”

Ultimately, the Wolverines' goal is to bring home their first national championship since 1997 and their first undisputed title since 1948.

While Sainristil acknowledges the undefeated Big Ten East Division champs can put themselves in prime playoff position with a win, he also notes the plan could fall apart if they overlook Purdue, the West Division champion whose campus is about an hour's drive from Indy.

“There’s no feeling like it,” tight end Luke Schoomaker said. “We’ve been through this week before. We know what it takes and what it’s going to take to grind it out and get another win.”

The Boilermakers pride themselves on living up to the nickname “spoilermakers.” They've beaten three top-three teams in the past four seasons — Ohio State in 2018 and Iowa and Michigan State last season — and will try to use a similar blueprint this time.

Two-time all-conference quarterback Aidan O'Connell leads an explosive offense with another all-conference receiver, Charlie Jones, while an opportunistic defense has generated takeaways. O'Connell spent part of this week with his family in Illinois after the recent death of his eldest brother, Sean.

With coach Jeff Brohm's aggressive and fun-loving approach, don't be surprised if the Boilermakers (8-4, 6-3) empty the playbook in their first title game appearance. They haven't won a Big Ten crown since Drew Brees' senior season in 2000.

“It’s something we’ve worked for for some time,” Purdue linebacker Kieren Douglas said. “It hasn't been done before and we're really excited for it and it's going a to be a great opportunity to show the world what we can do and what we’re made of.”

The Wolverines overcame a similar challenge last year by routing Iowa 42-7. This time, Michigan is playing for more than just a league title.

“I feel like no matter how good we’re doing, whether we’re at the top of the rankings or bottom of the rankings, people think Michigan shouldn’t be there,” Sainristil said. “I definitely think people are starting to notice us, but the only people’s opinion we care about are in here.”

Michigan will be without its best offensive player for the rest of the postseason.

Star running back Blake Corum is expected to have surgery on is injured left knee that would cause him to miss the postseason, a person with knowledge of the situation told The Associated Press on Thursday night. The person spoke on condition of anonymity because Michigan was not publicly disclosing Corum’s condition.

Corum played just one series last week after injuring his left knee the previous week at Illinois. He’s third in FBS with 19 TD runs and eighth with 1,463 yards rushing, but barely played at Ohio State.

Mike Morris, the Big Ten defensive lineman of the year, also could miss the game. He leads the Wolverines with 7 1/2 sacks and 10 1/2 tackles for loss but played sparingly last week after sitting out against Illiinois.

KEEPING UP WITH JONES

Purdue does have one player with championship game experience: Jones, who transferred from Iowa last summer. All he did this season was post Big Ten highs with 97 receptions and 1,199 yards and tied for the league lead with 12 TD receptions.

His advice is simple.

“Try to focus on the game itself,” he said. “There are a lot of different things going on with championship week, there’s a lot of extra things that could distract you. So I'll tell them stay focused on the game, it’s just another away trip.”

Michigan coach Jim Harbaugh has reshaped his coaching staff many times in eight seasons and his offensive and defensive coordinators when they took other jobs following a breakthrough 2021 season.

One constant, though, has been strength and conditioning coach Ben Herbert. Harbaugh said he's never made a better hire.