No. 2 Ohio State prepared for No. 13 Penn State's secondary 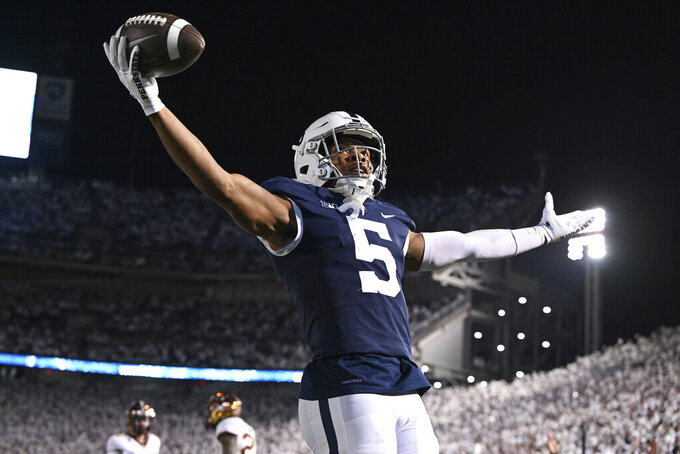 Ohio State’s coach wants his team to be ready for anything.

“We say sometimes you’re chasing ghosts, but I’ve been in games before where we didn’t chase those ghosts and we didn’t have answers and that’s not a good feeling,” Day said.

Fueled by one of college football’s best offenses, the Buckeyes have blown out their opponents — not even trailing in a game outside of a first quarter. But although Ohio State has won five straight in the series with the Nittany Lions and nine of the last 11, the last six games have been decided by less than a touchdown.

“Their triggerman is what makes them go,” Penn State coach James Franklin said.

The Buckeyes' offense looked average early at Iowa where it had to settle for three field goals in the first quarter. Stroud then poured it on in the second half with touchdowns to four different receivers.

No quarterback has had his way with Penn State’s gifted secondary yet this season, but the Nittany Lions have been susceptible to the run, allowing 418 rushing yards and four scores to Michigan before rebounding to hold Minnesota to 165 and one touchdown in last week’s win.

Ohio State expects the latter version of the Nittany Lions to show up.

“I think every week is a different season,” Day said. “You start from scratch.”

Penn State quarterback Sean Clifford also threw for four touchdowns a week ago. It was a nice bounce-back game for the sixth-year senior who played the worst statistical game of his career at Michigan.

Clifford, who’s always been billed as an Ohio native since he attended high school in Cincinnati, was quick to remind reporters earlier this week he was born in Illinois and did not grow up a Buckeye fan.

“Growing up in Ohio, I definitely understand the tradition,” Clifford said. “It’s very similar here to Penn State when it comes to the passion of the fans and how important football is to them.”

The team captain called himself out after the debacle at Michigan and said the onus was on him to get more penetration to free up the team’s linebackers to attack downhill.

“If we can do that up front, the linebackers are always going to be good,” Mustipher said.

They were better last week against Minnesota with a different configuration: True freshman Abdul Carter got his first start alongside middle backer Tyler Elsdon and outside man Curtis Jacobs.

Penn State is allowing about 140 rushing yards per game.

The Buckeyes never did get their running game on track against Iowa.

Even with stars TreVeyon Henderson and Miyan Williams healthy, the Buckeyes were limited to a season-low 66 yards on the ground. Henderson and Williams combined for 21 carries for 57 yards.

Day said he’s not overly concerned: “The issues were there, but when you play against a better defense the issues come to surface.”

Ohio State hasn’t shared many details of the hamstring injury that has dogged Jaxon Smith-Njigba since the first-week win over Notre Dame.

He played last week after a three-game absence but made just one catch for seven yards before leaving the game. Day said Smith-Njigba was on a “pitch count” and that he expects him to be ready to play again Saturday.