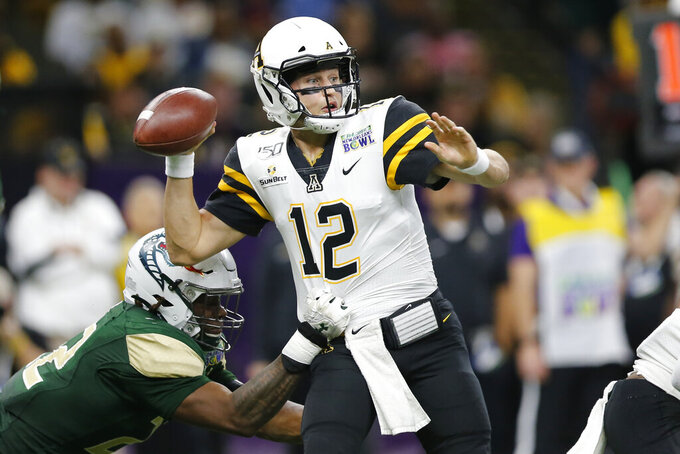 The Mountaineers added another fourth-down score when receiver Thomas Hennigan wrestled an under-thrown pass away from a UAB defensive back who tried to intercept it.

Those kinds of plays lifted No. 20 Appalachian State to a 31-17 victory over the Blazers in the New Orleans Bowl on Saturday night.

The Mountaineers (13-1) scored twice in the third quarter on quarterback fumbles. Evans, who rushed for a 157 yards, scored his lone touchdown when quarterback Zac Thomas lost the ball on a fourth-and-1 sneak. The ball rolled back toward Evans, who cleanly scooped it, made a sudden move to his right and sprinted into the open field.

Later, outside linebacker Nick Hampton stripped UAB quarterback Tyler Johnston, and inside linebacker Trey Cobb picked up the ball and returned it 24 yards to put Appalachian State in front 24-17.

“There was more crazy things that happened in this game than 10 games combined,” lamented UAB coach Bill Clark, calling the Appalachian State fumble that bounced straight back to Evans “pretty fluky."

“Give their running back credit,” the UAB coach added. "He made a heck of a play.”

Johnston, making his first start since injuring his knee Nov. 2 at Tennessee, passed for 298 yards and two touchdowns for UAB (9-5), but also was intercepted once and sacked four times.

Listed by odds makers as 17-point underdogs, the Blazers raced to a 14-0 lead in the first five minutes, only to be outscored 31-3 after that.

“We started off fast," Johnston said. “They brought more pressure in and I just kind of got a little frustrated.”

Now, Clark is running a program that has a good chance to end the season ranked inside the top 20.

“If you cut me open, I bleed black and gold,” he said. "I’m here for the long haul. ... I can’t wait to take this program places it’s never been before.”

Hennigan caught two touchdown passes for Appalachian State. The first came after UAB linebacker Jordan Smith was assessed a personal foul for leaping toward the line of scrimmage on Chandler Staton's missed 48-yard field goal attempt in the second quarter. Just two plays after the drive-extending penalty, Thomas found Hennigan for a 17-yard TD that cut UAB's lead to 14-10.

On his second touchdown, Hennigan had to rip Thomas' 27-yard throw from cornerback Starling Thomas as both fell to the turf in the third quarter, widening Appalachian State's lead to 31-17.

“I’m not the fastest guy; I haven’t ever been," Hennigan said. “I’m not going to be strongest guy out there, but the reason I’m playing college football is making the tough catches.”

Zac Thomas finished with 142 yards and two TDs passing for the Mountaineers, who were the Sun Belt Conference champions and finished the season on a six-game winning streak.

Austin Watkins caught 10 passes for 159 yards and a touchdown for the Blazers, but most of that came on UAB's first two possessions.

Watkins made a 35-yard catch on the first play of the game. That set up Johnston's 25-yard pass to Hayden Pittman, who made a diving catch in the end zone to make it 7-0 a mere 1:14 after the opening kickoff.

Watkins, who entered the game needing 67 yards receiving to reach 1,000 for the season, surpassed that on his fourth catch, a 41-yard grab down the left side early in the Blazers' second possession. Two plays later, Watkins had a 25-yard catch-and run for a touchdown to make it 14-0.

Appalachian State: The Mountaineers overcame relative struggles on offense with opportunism and athleticism. Their ability to win comfortably after falling behind by two touchdowns demonstrated why they were among the strongest mid-major programs in the nation this season.

UAB: The Blazers, with only one prior bowl triumph in program history, opened with an intensity that showed how much this game mattered to them. They kept it close until late in the third quarter, when mistakes and some bad bounces caught up to them.

Appalachian State could move up a few spots, depending on subsequent bowl results, for its highest ranking this season.

Appalachian State: Evans, Thomas and most other prominent players return to what will be a senior-laden squad looking to challenge for a New Year's Day bowl under their new coach. They begin the season at home against Morgan State on Sept. 5.

UAB: The Blazers will carry high expectations into next season with a total of 18 starters coming back on offense and defense. They open with a Thursday night home game against New Mexico State on Sept. 3.

“We got almost this whole team back so they got high expectations for next year,” Bill Clark said. “We’re really excited about where our program’s headed.”