No. 20 Pittsburgh visits Syracuse; win or else for Orange 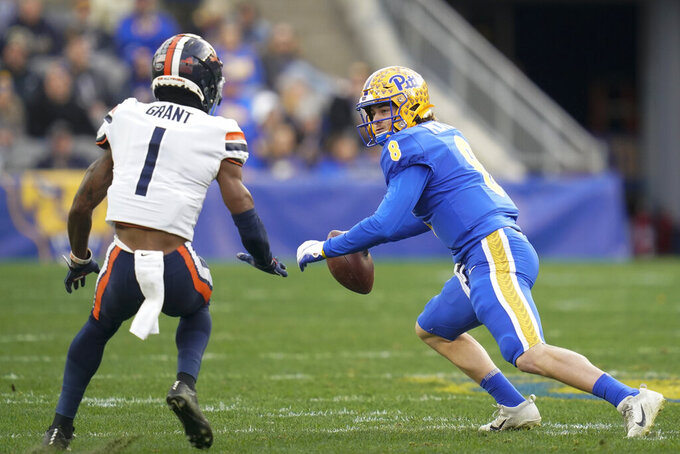 Line: Pittsburgh by 13 1/2, according to FanDuel Sportsbook.

Pittsburgh has already clinched the Coastal Division title and will play for the ACC championship. The Panthers are seeking their first 10-win regular season since 1981. Syracuse has lost two straight and must win to become eligible to play in a bowl game.

The Syracuse defense against the high-powered Pitt attack. Panthers quarterback Kenny Pickett has 36 TD passes on the year and the offense is averaging 370 yards passing and 9.1 yards per attempt. Pitt also leads the conference offensively, averaging 529 yards. The Orange are third in total defense (330 yards per game) and pass defense (203.8) but have produced only five turnovers and are tied with Duke for the worst turnover margin in the ACC.

Pittsburgh: WR Jordan Addison. The sophomore had 14 catches for 202 yards and four touchdowns last week in a 48-38 win over Virginia and leads the nation with 15 touchdown receptions. Addison also ranks fourth nationally with an ACC-high 1,272 receiving yards.

Syracuse: RB Sean Tucker. He's averaging 6.3 yards per carry and is the Orange’s single-season rushing leader with 1,467 yards, 95 more than the previous mark set in 1979 by Joe Morris. Tucker has nine 100-yard games this season and has scored 14 touchdowns, all but two of them on the ground.

Pickett ranks third in ACC history with 11,841 passing yards and is just 64 yards shy of passing Clemson’s Tajh Boyd for second. Pickett is also fourth in ACC history with 12,626 total yards of offense, 444 yards shy of passing Boyd for third and 550 shy of passing Louisville’s Lamar Jackson for second. ... Pickett needs just 143 yards passing to post the first 4,000-yard season in school history and just two touchdown passes to break the school-record for most in a single season (37) shared by Hall of Famer Dan Marino and Rod Rutherford. ... Pitt is looking for its first undefeated road record since 1987. ... Addison's 15 TD receptions are the most by a Pitt player since Larry Fitzgerald led the nation with 22 in 2003 on his way to being the Heisman runner-up. ... The Panthers limited Syracuse to 171 total yards in last year’s 21-10 win at Heinz Field. ... The Panthers have won 14 of the last 16 in the series, which was first played in 1916.