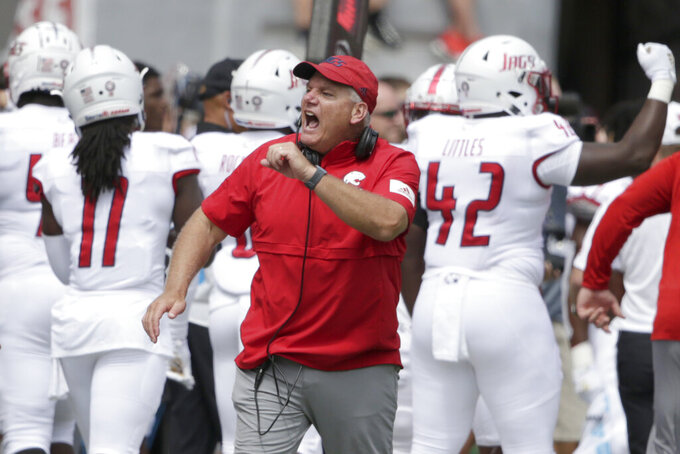 LINCOLN, Neb. (AP) — As happy as he was with his defense, Scott Frost was in no mood to celebrate after Nebraska's opener against South Alabama.

Frost's coaching resume is built on offense, and he didn't like what he saw in the No. 24 Cornhuskers' 35-21 victory Saturday.

"That's as anemic an offensive effort I've been a part of in a long time," Frost said. "That's not the offense I've been seeing all fall camp. We have to go back to the drawing board and figure out what happened today. I give credit to South Alabama for the coaching job they did. Their kids came in and fought."

Two defensive touchdowns and one on special teams bailed out an offense that generated only 276 yards, including just 66 in the second half, and never established a ground game against an opponent from the Sun Belt Conference that ranked 101st against the run last season.

"It's no secret we played very poor," quarterback Adrian Martinez said. "It's probably the worst we've played in a long time, and it's not acceptable. We're happy we got the win. Our defense played great, special teams made some plays, but offensively we need to be a lot better. It's pretty simple."

The five-touchdown favorite Huskers led only 14-7 at halftime, and the anxiety at Memorial Stadium was palpable.

But the defense had five takeaways, the biggest one Eric Lee Jr.'s 38-yard interception return for a touchdown, and JD Spielman ran back a punt 76 yards to make it a three-touchdown game early in the third quarter.

South Alabama wouldn't go away. The Jaguars converted two straight turnovers into touchdowns to cut it to 28-21 and had the ball heading into the fourth quarter.

Things started turning for Nebraska when Cam Taylor hammered Jaguars quarterback Cephus Johnson, popping the ball loose, and Alex Davis picked it up at the goal line and stepped into the end zone for a touchdown.

Then, with South Alabama threatening from the Nebraska 12, Taylor stepped in front of Johnson's pass and ran in back to midfield.

The Huskers had three non-offensive touchdowns for the first time since 2005.

It was the second straight time the Huskers struggled against a Sun Belt team. Last year they lost at home to Troy, one of the lowest points in a 4-8 season.

The Huskers averaged just 2.2 yards per carry against the Jaguars and finished with 98 on the ground. They were outgained by 38 yards and had 15 first downs to South Alabama's 19.

"Disappointing loss," Jaguars coach Steve Campbell said. "When you have more total yards, more first downs, I think we were a little better than them on third down efficiency... Then to come up short, that tells you what a big stat turnovers is. You can look at explosives and all that stuff all you want to. Still, it's a game of turnovers."

Martinez was intercepted once and nearly two other times, had difficulty handling center Cam Jurgens' high snaps and the offensive line was beaten often by pass rushers.

The Huskers' best series was their first, when they drove 81 yards in nine plays for a touchdown. Only three of their remaining possessions lasted more than five plays.

Martinez, the most productive freshman quarterback in the nation last year, passed for 178 yards but was held to 6 yards on 13 carries.

"I'm not worried about Adrian because I know how he can play and who he is," Frost said. "I don't think he had his best game. If that's our fault for putting him in bad situations, we'll get it fixed."

South Alabama: The Jaguars look like they could be better than the 3-9 team in Campbell's first year.

Nebraska: The Huskers will be facing questions all week about their poor production on offense. They were outgained 314-276.

Freshman Dylan Jorgensen handled the place-kicking with Barret Pickering injured. ... Redshirt freshman Cam Jurgens became the first freshman (true or redshirt) to start at center for Nebraska since freshman eligibility was reinstated in 1972. ... The Jaguars are 1-3 against ranked opponents.

Nebraska was in the preseason Top 25 for the first time since 2014. The voters must decide if the Huskers still merit a spot after having to fight for four quarters against a Sun Belt Conference opponent.

Nebraska visits Colorado, which came from behind to win in Lincoln last year.