No. 3 Georgia can handle adversity but wants to start faster 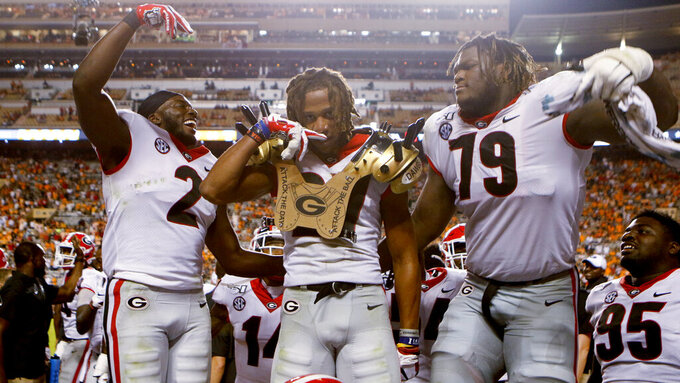 "It says we need to start better," Smart said Saturday night after the third-ranked Bulldogs scored the final 33 points in a 43-14 victory at Tennessee.

Georgia (5-0, 2-0 SEC) likely will need to deliver more complete performances from start to finish in order to remain unbeaten. But the Bulldogs certainly have shown they can respond to whatever an opponent throws at them.

Two weeks ago, Georgia trailed 10-7 at halftime but dominated the third quarter and held on for a 23-17 victory over No. 9 Notre Dame. Georgia was behind Tennessee (1-4, 0-2) for most of the second period Saturday before wearing down an overmatched opponent.

"We handle adversity as well as anybody," Georgia safety Richard LeCounte said.

If that happens, Georgia could find itself back in the College Football Playoff for the second time in three years. The Bulldogs have all the elements of a playoff-caliber team.

Quarterback Jake Fromm has completed 77.5% of his pass attempts, hasn't thrown an interception and has been sacked only once . Georgia has the SEC's top rushing attack and ranks third nationally in yards per carry (6.7).

"Our offense is playing good right now," Fromm said. "We just want to keep getting better."

Kicker Rodrigo Blankenship is 11 of 11 on field-goal attempts this season and is 5 of 6 in his career from at least 50 yards out. Georgia's defense hasn't allowed a touchdown run all season and limited Tennessee to 70 yards on 29 carries despite losing nose tackle Jordan Davis to a sprained ankle on the game's opening series.

That superb run defense eventually helped Georgia cool off Maurer, who had passed for 209 yards in the first half as Tennessee grabbed a 14-10 lead. In the second half, Maurer threw for just 50 yards and had two turnovers as Tennessee went scoreless.

Now the Bulldogs need to protect their perfect record before their Nov. 2 showdown with No. 7 Florida (6-0, 3-0). Georgia hosts South Carolina (2-3, 1-2) and Kentucky (2-3, 0-3) the next two weeks as the Bulldogs attempt to build on the momentum they've established in these comebacks.

The Bulldogs could have staggered after giving up a 73-yard touchdown pass from Maurer to Marquez Callaway on the Volunteers' second series. They could have panicked after trailing for most of the second quarter. Instead, they responded in dominant fashion.

"They punched us in the face with the big play - and we responded," Smart said.

In the future, they'd prefer to deliver an early knockout.