No. 4 Alabama aims to rebound against Mississippi State 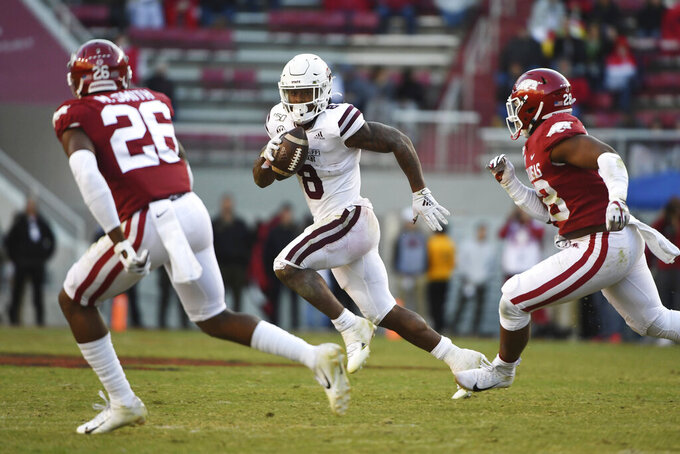 Mississippi State running back Kylin Hill (8) tries to get past Arkansas defenders Micahh Smith (26) and Andrew Parker (28) as he runs for a gain during the second half of an NCAA college football game, Saturday, Nov. 2, 2019 in Fayetteville, Ark. (AP Photo/Michael Woods)

STARKVILLE, Miss. (AP) — Mississippi State is catching Alabama on the rebound, for better or worse.

The fourth-ranked Crimson Tide visits the Bulldogs Saturday seeking to bounce back from a loss that dealt a blow to the team’s Southeastern Conference and national title hopes.

Quarterback Tua Tagovailoa’s status is once again “a game-time decision,” according to Alabama coach Nick Saban. But Tagovailoa went the distance in a 46-41 loss to No. 1 LSU, a major setback that most likely cost Alabama (8-1, 5-1 SEC) at least a shot at the league title.

The Tide remains fifth in the playoff rankings and has some pressure to not only beat the Bulldogs (4-5, 2-4) but look strong doing it — no matter who’s at quarterback.

“We’re not anticipating any kind of lingering effect or any kind of hangover or anything,” Mississippi State coach Joe Moorhead said. “We’re expecting their best, and they’re going to get our best as well.”

Alabama remains favored by 17-1/2 points but the spread has narrowed by four points during the week presumably with uncertainty about Tagovailoa’s status. He played against LSU 20 days after surgery for a high ankle sprain, passing for 418 yards and four touchdowns but also throwing an interception and fumbling.

Backup Mac Jones started for the Tide in a 48-7 win over Arkansas.

The Tide is still in the playoff hunt but likely needs to pair strong performances with some help in other games.

“We just move forward, work on what we need to do, and finish out the season strong and hopefully see where it takes us,” Alabama cornerback Patrick Surtain Jr. said. “We can’t control our destiny.”

Mississippi State had an open date after snapping a four-game losing streak with an offensive explosion against the Razorbacks. The Bulldogs have lost the last 11 meetings with Alabama.

Some other things to watch when Alabama travels to Mississippi State:

Saban said Tagovailoa “made a lot of progress” by Wednesday’s practice, but remained limited. If Alabama holds him out, it’s Jones’s turn again. The sophomore was efficient in his starting debut if not as dynamic in the passing game. He completed 18 of 22 passes for 235 yards against Arkansas, throwing for three touchdowns without an interception.

Alabama has won the last 11 meetings with the Bulldogs since a 17-12 loss in Saban’s first season with the Tide. Mississippi State has scored 10 points or less nine times during that streak.

The Bulldogs racked up 640 total yards and 460 rushing yards — both school records for an SEC game — against Arkansas. Kylin Hill, the SEC’s leading rusher, had a huge game with 234 yards.

Alabama has bounced back strongly from regular season losses in the past. The Tide fell to Auburn in the 2017 regular-season finale then went on to win a national title. ‘Bama followed an early 2015 loss to Mississippi by reeling off 26 consecutive wins, including another championship.

The silver lining: Saban says it’s easier to get lessons to sink in when the team isn’t rolling.

“If we’re having success, why do we have to change anything?” he said, summing up players’ mentality. “But when you don’t have success and you don’t play like you’d like to, I think more people are much more willing to take notice and try to do things the right way so that they have a chance to win.”

Moorhead said both Bulldogs quarterbacks — Tommy Stevens and Garrett Shrader — are both in line to play. Stevens led the offense against Arkansas when Shrader missed the game with “general health issues.” Both appear to be healthy now.