No. 5 Clemson visits No. 21 Wake Forest in key ACC clash 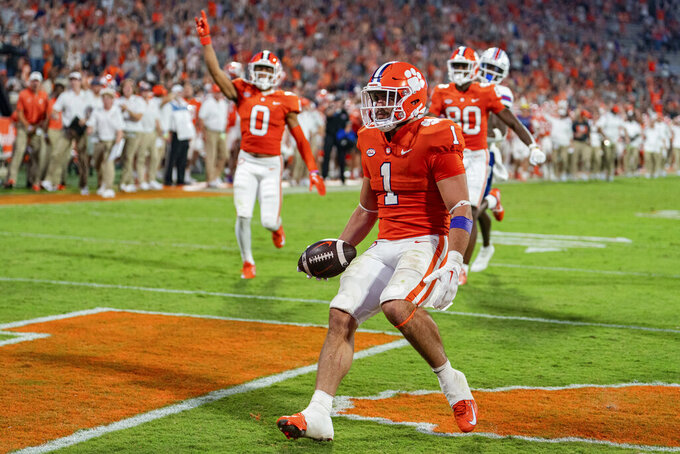 Line: Clemson by 8 1/2, according to FanDuel Sportsbook.

The Tigers are starting a two-week stretch that could allow them to take complete control of the league's Atlantic Division race, starting with a trip to face the reigning division champion Demon Deacons. Clemson, which hosts No. 12 North Carolina State next week, won six straight ACC titles before Wake Forest reached last year's ACC championship game. The Demon Deacons, who are coming off a close home win against Liberty, have lost 13 straight to the Tigers.

Clemson's defense against Wake Forest's offense. The Demon Deacons had one of the best offenses in the Bowl Subdivision ranks last year and are third in the ACC in scoring (42.0) through three games. But the Tigers have held their first three opponents to a combined 42 points and an average of 312.7 yards per game.

Clemson: RB Will Shipley. Shipley is averaging 83.0 yards rushing per game to go with six rushing scores. He ran for a career-best 139 yards with two scores in last week's win against Louisiana Tech.

Wake Forest: QB Sam Hartman. He has thrown for 625 yards and seven touchdowns in his first two games since missing much of preseason camp and the season opener due to a blood clot.

Wake Forest hasn't beaten Clemson since a 12-7 win in October 2008, which led to the ouster of then-coach Tommy Bowden and the promotion of current Tigers coach Dabo Swinney as an interim choice. ... The Demon Deacons have won 11 straight home games since falling to then-No. 1 Clemson to start the 2020 season. ... The Tigers have lost one divisional game since October 2017, falling at N.C. State last year. ... Clemson QB D.J. Uiagalelei has thrown for five touchdowns with one interception. ... The Tigers are tied for 17th in FBS with just 38.3 penalty yards per game. ... The Demon Deacons are tied for 10th in FBS with eight takeaways. ... Clemson won last year's meeting 48-27 at home.