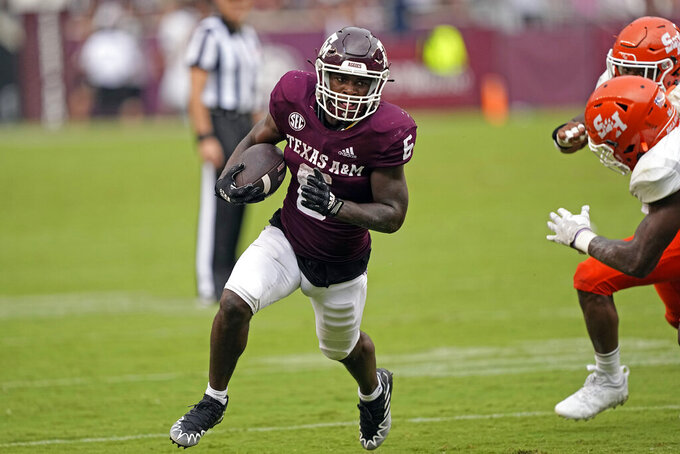 Texas A&M running back Devon Achane (6) runs for a first down during the second half of an NCAA college football game against Sam Houston State Saturday, Sept. 3, 2022, in College Station, Texas. (AP Photo/David J. Phillip)

If he and the No. 6 Aggies needed a reminder of just how dangerous the Mountaineers can be as they prepare to host them Saturday, they got one last week when Appalachian State scored six touchdowns and 40 points in the fourth quarter alone before losing a 63-61 thriller to North Carolina.

“This team can play in any league,” Fisher said. “They have great players, have gotten a few transfers and recruited well. This is a great team and one that can play on either side of the ball.”

Appalachian State plays in the Sun Belt and has been in the FBS since 2014. The Mountaineers made history in their opener in 2007 when they shocked No. 5 Michigan 34-32 in Ann Arbor by blocking a field goal as time expired. It was the first time an FCS team had defeated a FBS team ranked in The AP Top 25 poll and remains one of the biggest upsets in college sports history.

Years removed from that huge win, Appalachian State showed Saturday that they remain a team that doesn’t back down from Power Five competition.

“Our team never stopped fighting,” Appalachian State coach Shawn Clark said. “We fought until the very end so I’m very proud of them.”

They will face a stern test in the Aggies, who are coming off a 31-0 victory over FCS school Sam Houston.

“They recruit at the highest level in college sports and coach Fisher has done an outstanding job,” Clark said. “They have great playmakers. They have an exceptional offense, defense. Schematically they give you a lot of tough situations. We have our work cut out for us.”

While the Aggies came away with a resounding victory, they’re looking to improve after turning the ball over twice and getting off to a slow start before taking over.

The Aggies will try to get their running game going after Devon Achane struggled in the opener. Achane managed just 42 yards on 18 carries for a 2.3 yards per carry average after ranking 11th in the nation by averaging 7 yards a carry last season.

Fisher said everyone must play better to help Achane be more productive.

“We’ve just got to be patient,” Fisher said. “It’s tough. It can be a pain. We’ve got to do a better job, though. That’s my fault. We’ve got to prepare them better.”

Appalachian State quarterback Chase Brice earned Sun Belt offensive player of the week honors for his performance against North Carolina. Brice had a career-high 361 yards passing and a school-record six touchdowns in the loss. He led Appalachian State’s comeback effort, throwing for 203 yards and four touchdowns in the final quarter. Two TD tosses came in the final 31 seconds.

Texas A&M defensive lineman Isaiah Raikes took note of Brice’s work and knows the defense will have to play well if the unit hopes to build on last week’s shutout.

Fisher wasn’t thrilled with the two interceptions thrown by Haynes King. But he was encouraged with several big plays he made against Sam Houston.

While Appalachian State’s offensive outburst was the talk of college football this week, the performance on defense was something the Mountaineers would like to forget.

The 63 points given up was the second-most allowed in the nation in the opening week of the season.

The team’s defensive failures had Clark at his office early Sunday looking for ways to improve this week.

“Our defensive players knew we didn’t play up to the standard of App State football,” Clark said. “We were very candid about it... there’s no doubt in my mind that they’ll bounce back from that performance.”