No. 7 Kentucky visits No. 14 Mississippi in SEC showdown 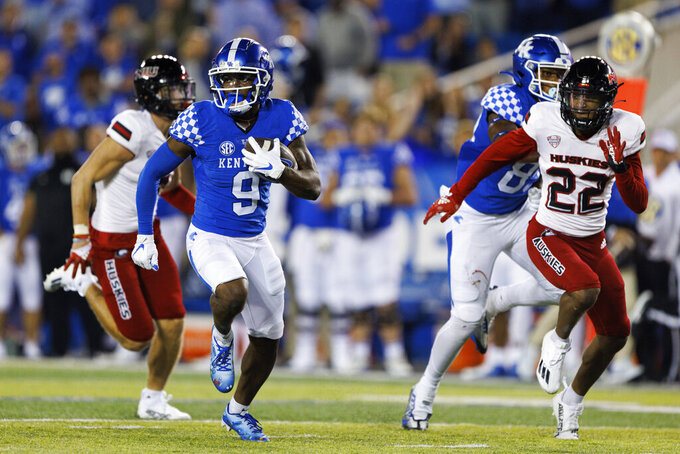 Kentucky wide receiver Tayvion Robinson (9) runs the ball down the field for a touchdown during the second half of an NCAA college football game against Northern Illinois in Lexington, Ky., Saturday, Sept. 24, 2022. (AP Photo/Michael Clubb)

A look at Week 5 in the Southeastern Conference:

These two teams have not faced each other with both ranked since 1958. The Wildcats have won their last eight and are ranked in the AP top 10 for the third consecutive week after Will Levis’ third 300-yard passing performance in four games. Kentucky has relied on his arm to offset little help from the ground game, which receives a significant boost this week with the return of All-SEC back Chris Rodriguez Jr. from a four-game suspension. The Rebels have won their last 12 at home dating to 2020. Ole Miss features the SEC’s top ground attack at 280.7 yards per game and is fourth in scoring (41.0 points). The Rebels are 6.5-point favorites, according to FanDuel.com Sportsbook. The SEC’s other ranked matchup pits No. 2 Alabama (4-0, 1-0) at No. 20 Arkansas (3-1, 1-1).

The two Tigers have a recent history of close finishes. The home team has won 18 of the past 22 meetings with 12 of 18 decided by seven points or less. Auburn maintained that trend last fall by rallying from a 19-10 deficit to outscore LSU 14-0 fourth quarter and win in Baton Rouge. First-year LSU coach Brian Kelly brings in the nation’s No. 12 defense (257.8 yards allowed) and its No. 8 pass D (146.5). Auburn is coming off a 17-14 overtime victory over Missouri.

Tayvion Robinson, WR, Kentucky. The Virginia Tech transfer has fulfilled big-play expectations for the Wildcats. Robinson posted career bests of seven catches for 147 yards, including touchdowns of 69 and 40 yards respectively, last week against Northern Illinois. His team-high 349 yards receiving rank third in the SEC and second per game at 87.3. Robinson and freshmen Dane Key and Barion Brown have provided receiving options for Kentucky a season after relying primarily on Wan’Dale Robinson.

Mississippi State QB Will Rogers tied his own school record with six passing TDs last week against Bowling Green. ... Alabama rolled up 628 yards in its 55-3 rout of Vanderbilt. ... Kentucky broke 100 net yards rushing for the first time this season against NIU, led by Kavosiey Smoke’s 85 yards on 12 carries. ... Florida’s inaugural meeting against Eastern Washington was moved to Sunday as a precaution because of Hurricane Ian.

Mississippi State has a chance to beat a ranked Texas A&M squad for the fourth time in five meetings when the No. 17 Aggies visit Starkville. The Bulldogs pulled off a 26-22 stunner last season in College Station for one of their five wins over Top 25 teams. In a twist, MSU enters as a 3½-point favorite according to FanDuel.com Sportsbook, making it a toss-up game in a series officially tied at 7 (the NCAA vacated a 2018 Bulldogs win). The Bulldogs are coming off a 45-14 drubbing of Bowling Green and seeking their first SEC win two weeks after losing at LSU. The Aggies have rebounded from their upset loss to Appalachian State by topping No. 13 Miami (Fla.) and No. 10 Arkansas.