No. 9 Michigan aims to bounce back vs. Indiana 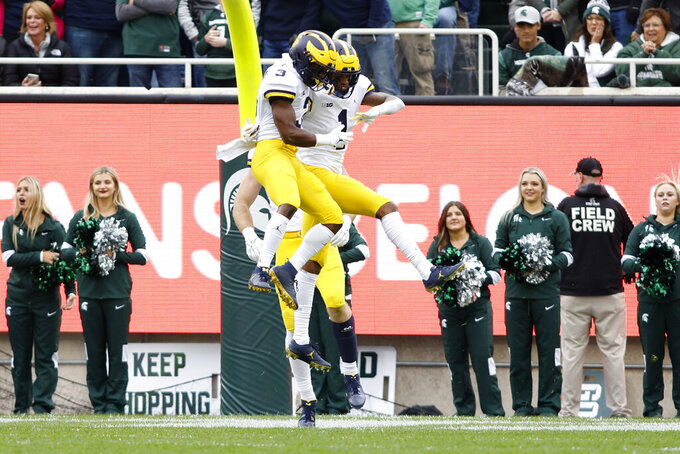 Line: Michigan by 19 1/2, according to FanDuel Sportsbook.

The Wolverines are trying to recover from their late collapse to in-state rival Michigan State and remain in the Big Ten title hunt. Michigan gave away a 16-point, second-half lead to the Spartans while suffering its first loss this season. The Hoosiers started this season with Big Ten title hopes. They still haven’t won a conference game and another loss Saturday could end their hopes of making a third consecutive bowl game.

Indiana’s rushing game vs. Michigan’s front seven. With their quarterback situation in flux due to injuries, the Hoosiers need to have an effective running game to pull off the upset. Indiana ranks 10th in the Big Ten with an average of 122.8 yards rushing. The Hoosiers’ offensive line will have find ways to neutralize star Aidan Hutchinson and Christopher Hinton to create holes for Stephen Carr.

Indiana: QB Donaven McCulley. When he replaced the injured Jack Tuttle after the first series against Ohio State, the true freshman looked overmatched. Last week, he showed promise by going 14 of 25 with 242 yards and two touchdowns at Maryland.

Michigan: WR Andrel Anthony. A freshman from East Lansing, Anthony came out of nowhere to record 155 yards and two touchdowns against Michigan State. Anthony will now have to prove it wasn’t just a one-game fluke. The Wolverines have been searching for a No. 1 receiving option since Ronnie Bell was injured in the season opener.

Michigan has won 39 of the last 41 meetings with Indiana. … The Hoosiers snapped a 24-game losing streak to the Wolverines with a 38-21 victory last season. The only times Indiana has won two straight against the Wolverines came in 1958-59 and 1944-45. ... Wolverines LB David Ojabo has seven sacks and three forced fumbles despite starting just three games. ... Indiana has lost all five games it has played against teams appearing in the top 10 this season. ... The Hoosiers’ Peyton Hendershot needs one TD catch to tie Ted Bolser’s school record (15) for a tight end.