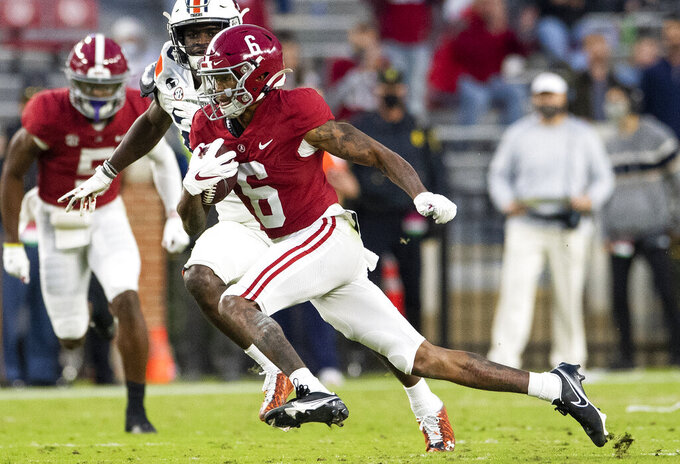 Ohio State held on to the fourth spot in the College Football Playoff rankings on Tuesday night after having its previous game canceled, landing behind No. 1 Alabama, No. 2 Notre Dame and No. 3 Clemson for a second straight week.

The selection committee's top seven teams were unchanged from last week's rankings after the playoff contenders either won comfortably or didn't play because of COVID-19 issues.

Ohio State (4-0) had to cancel its game at Illinois last week because of a spike in COVID-19 cases in the program. It was the second game of the season the Buckeyes have missed out on. One more cancellation would leave them ineligible for the Big Ten championship game and unable to play more than six regular-season games.

No. 7 Cincinnati (8-0) also had its last game canceled. The Bearcats are next scheduled to play Dec. 12 at Tulsa.

The College Football Playoff has set no minimum number of games played to be eligible for the playoff. It's just going to be up to the selection committee to figure out how many is too few.

“There is a discrepancy sometimes between a team that plays eight or nine games and a team that’s played three or four games and frankly that’s a problem (in ranking teams),” said selection committee chairman Gary Barta, who is Iowa's athletic director.

Barta said the committee discussed ranking Texas A&M ahead of Ohio State, but for now the Buckeyes and their potent offense led by quarterback Justin Fields are holding down the final playoff spot.

"When those two teams were put side-by-side this morning and last night, there just wasn’t enough there to put Texas A&M ahead of Ohio State,” Barta said.

Texas A&M is coming off a 20-7 victory against LSU that was played in a rainy and windy conditions.

Georgia was eighth and Iowa State and Miami rounded out the top 10. Oklahoma was 11th, followed by Indiana and BYU.

The Cougars, who are hoping for a New Year's Six bowl, edged up one spot.

ESPN's Kirk Herbstreit caused a commotion with some of his analysis regarding Ohio State, Michigan and teams using COVID-19 as an excuse to not play.

Michigan did not hold in-person team activities Monday and Tuesday after returning at least one positive test in the program. The Wolverines (2-4) are scheduled to host Maryland this week and play at Ohio State on Dec. 12.

“Is that fair?" the former Ohio State quarterback said. "Michigan could opt out basically of that game and could keep Ohio State out of six games to quality for the Big Ten championship. That doesn’t make sense to me.”

Given a chance to clarify his comment by host Rece Davis, Herbstreit said he was hearing from coaches around the country who believed that some teams were opting out to avoid playing games because “they don't want to get humiliated.”

Not long after the show ended, Herbstreit posted a video on Twitter apologizing to Michigan.

“I had no business at all saying that. I have no evidence of that,” Herbstreit said. “It was completely unfair to the University of Michigan, to Jim Harbaugh, to his players and coaches, and I just wanted to apologize.”