Once high-flying Auburn and LSU try to salvage seasons 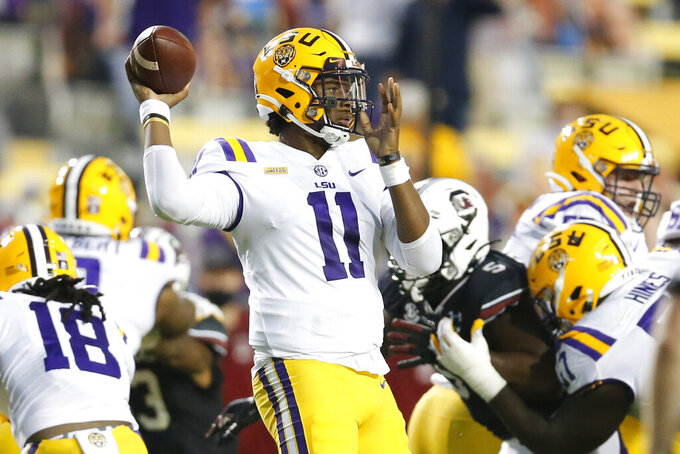 One of those teams can take a significant step in that direction when the two SEC West Tigers meet on Saturday at Jordan-Hare Stadium.

Auburn (3-2), at one point ranked No. 7, narrowly escaped with a win over Mississippi. Defending national champion LSU (2-2) has taken quite a fall since opening the season ranked No. 6 and is coping with an injury to quarterback Myles Brennan.

Freshman TJ Finley is expected to start in his place after leading LSU to a win over South Carolina.

LSU has won the last three meetings but the games have been decided by a collective 14 points the past four seasons.

“They get up every year for LSU and LSU gets up for Auburn,” LSU coach Ed Orgeron said. “It’s just been a good battle, cause there’s a lot of great athletes and a lot of great coaching going on in the game.”

Auburn coach Gus Malzahn has some painful memories of the past few meetings.

“We've had three games that went down to the end and we came up on the short end all three times,” Malzahn said.

At least one of the teams has been ranked in 24 of the last 25 meetings. Auburn put LSU to a closer test than anyone last year before losing 23-20 when both teams were ranked in the top 10.

In addition to Finley, who is coming off an impressive debut last weekend, a couple other freshmen have emerged as major contributors for LSU — namely, cornerback Eli Ricks, defensive end BJ Ojulari and tight end Arik Gilbert. Ricks’ pick-six against South Carolina last Saturday was his team-leading third interception this season. Ojulari had three sacks in that same game, bringing his season total to a team-leading four. Gilbert is second on the team in catches with 16, yards receiving with 204 yards and tied for second on the team in touchdowns receiving with two.

“We’re selling that to our recruits,” Orgeron boasted this week. “If you want to play as a freshman, have success, come to LSU.”

LSU’s offensive line and running back tandem of Tyrion Davis-Price and John Emery sound confident that their rushing attack is turning the corner after a sub-par start to the season.

LSU rushers combined for 276 yards against the Gamecocks, with Emery and Tyrion Davis-Price each scoring from inside the 5.

“What was really encouraging last week is we kind of went into the game knowing that we wanted to run the football and that was the game plan and we had a ton of success doing so, trying to build our identity as a football team,” LSU center Liam Shanahan said. “Hopefully, we’ll be able to keep building on that going forward.”

Roger McCreary has emerged as Auburn's top shutdown cornerback who often lines up against the opposing team's top receiver. He'll face a huge challenge against the Tigers. Terrace Marshall Jr. has 27 catches for 512 yards and nine touchdowns in just four games.

Auburn must replace injured right guard Brandon Council (knee) from an offensive line that has already had some shuffling this season.

Redshirt freshman Keiondre Jones replaced him against Ole Miss and senior Austin Troxell is another possibility Saturday against LSU.

“We’ve got guys that can step up and fill the role and just be able to go," right tackle Brodarious Hamm said. "We can’t miss a beat out there.”

Tank Bigsby is only the third Auburn freshman to rush for 100-plus yards in three consecutive SEC. Bo Jackson (1982) and Michael Dyer (2010) also did it. Bigsby leads the SEC and ranks third nationally in all-purpose yards, averaging 163.2 per game.