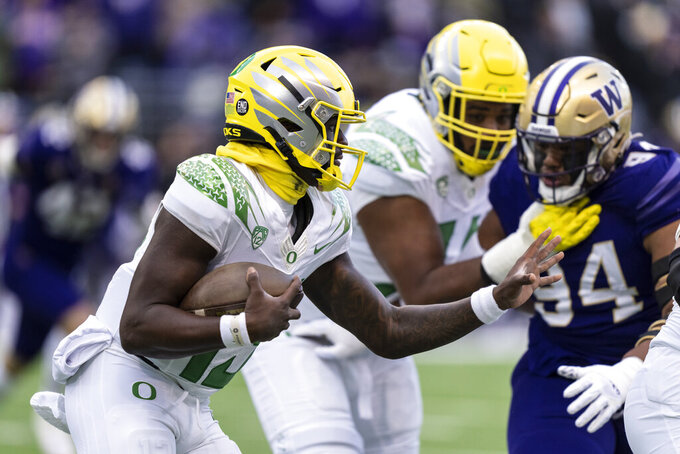 Oregon quarterback Anthony Brown, left, runs with the ball during the first half of an NCAA college football game against Washington, Saturday, Nov. 6, 2021, in Seattle. (AP Photo/Stephen Brashear)

EUGENE, Ore. (AP) — No. 5 Oregon sure appears to be on a roll toward the Pac-12 North title and a spot in the conference championship game.

Beyond that, it's anyone's guess. But first the Ducks need to get past Washington State.

Oregon, ranked No. 3 in the College Football Playoff rankings, hosts the Cougars on Saturday.

Oregon (8-1, 5-1 Pac-12) can clinch the league's North Division with a win over Washington State combined with a Stanford victory on Saturday over Oregon State.

The Ducks are coming off a 26-16 victory on the road over rival Washington. Oregon's defense had a big game, holding the Huskies to just 166 total yards.

Taking all those things into account, the Cougars (5-4, 4-2) would like nothing more than to pull off an upset. Washington State sits behind Oregon atop the North standings.

The stakes are high for the Cougs. They need one more win to become bowl eligible and perhaps redeem a season that has been marked by turbulence. Washington State dismissed head coach Nick Rolovich on Oct. 18 after his refusal to get vaccinated against COVID-19.

The saga brought unwanted attention to the team, but the Cougars bonded in the face of adversity. They're coming off a bye following a 34-21 road victory over Arizona State.

“No. 1, they’re really talented. Secondly, the scheme. Veteran offensive line. These guys are as fundamentally and technically sound as you will find. They play physical, hardnose and tough," Oregon coach Mario Cristobal said.

Travis Dye took over as the Ducks' top running back after CJ Verdell was ruled out for the season because of injury. In the four games since Verdell was sidelined, Dye has rushed for 438 yards and eight touchdowns. Dye ranks second overall in the Pac-12 with an average of just over 91 yards rushing a game.

He also leads the Ducks in receiving yards with 277.

“He’s an old-school player. He doesn’t wear gloves," Dickert said. "We’ve got to win some first downs to get them behind the chains. We’ve got to contain him as best we can.”

Cristobal said Dye is about more than just piling up offensive yards.

“The pride that he takes in the course of the week, in the preparation, and then I wish you could see him behind the scenes as a leader and the amount of energy and passion generated," Cristobal said. "The way he addresses, encourages, talks, pushes and challenges his teammates is really special.”

Last year in Pullman, Washington, the Cougars led 19-14 at halftime but the 11th-ranked Ducks pulled away in the second half, with Dye catching two second-half touchdown passes, to win 43-29. The year before, in Eugene, Oregon won it 37-35 on Camden Lewis' 26-yard field goal as time expired.

“The focus is on the now and what this team can do now,” Dickert said. “We’ve had a lot of close matches over the years.”

Oregon has won 17 straight games at Autzen Stadium, the third-longest active streak in the nation. The Ducks have also won 13 straight at home against Pac-12 opponents.

Washington State has won four straight conference games, although the team fell to BYU in a midseason nonconference game on Oct. 23.

Washington State hasn’t defeated a team ranked in the AP Top 25 since beating No. 25 Iowa State in the 2018 Alamo Bowl.

The Cougars last defeated a team in the Top 10 in 2017, when they upset No. 5 Southern California in Pullman.

Washington State right guard Cade Beresford is making steady progress in his recovery from a lower-body injury and could be ready to play, Dickert said.

Free safety Halid Djibril started WSU’s first two games but has not played since suffering a leg injury Sept. 11 against Portland State. Dickert said he could be ready to return, too.

On Oregon's end, weakside linebacker Jackson LaDuke has returned to practice. He probably won't be back Saturday but could play next week for the first time since he was injured in preseason camp.

Safety Steve Stephens IV, who didn't play against Washington after he hyperextended his knee the week before, is expected to remain out.