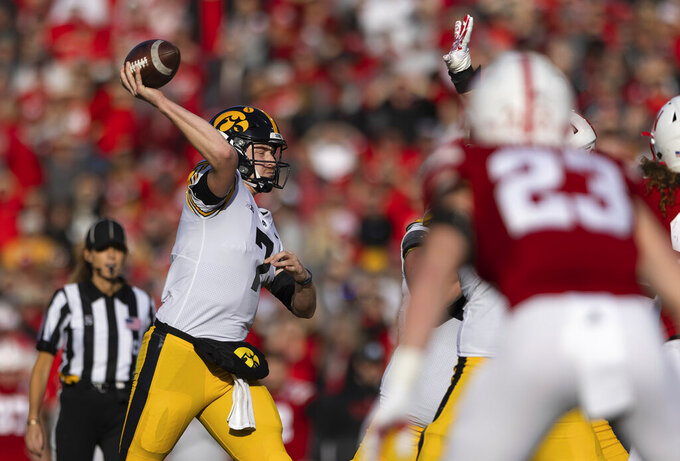 IOWA CITY, Iowa (AP) — Spencer Petras will be the starting quarterback when No. 15 Iowa plays second-ranked Michigan in the Big Ten championship game on Saturday night.

Petras was listed first on the depth chart released at the start of the week, and coach Kirk Ferentz made it official Tuesday.

Petras started every game last year and the first nine games this season. He missed two full games with an injured right (throwing) shoulder before replacing Alex Padilla after halftime of last week's 28-21 win at Nebraska.

“The way I see it, I got hurt, Alex stepped in and did a really good job,” Petras said. “I just think at this time of year, it’s not as much of a competition. That takes place in fall camp. It’s more who can help the team win the best that week. When I was hurt, that was certainly Alex. It seems right now that it’s me.”

Ferentz said it was a “gut feeling” that prompted him to put Petras in the game with Iowa trailing the Cornhuskers 14-6 at half last Friday.

“I thought he did a good job,” Ferentz said. “And he’s done a lot of good things over two years. We haven’t forgotten about that at all.”

Petras was 7 of 13 for 102 yards, had the game-winning 2-yard touchdown dive in the fourth quarter and had a critical third-down completion for a first down on the previous possession when Iowa tied the game on a field goal.

“It’s definitely a lot of fun to get back out there,” Petras said. “No one’s goal is to be on the bench. So yeah, it felt good to be back out there.”

Petras was 6-2 as the starter last season, and he won his first six starts this season. But Petras hurt his shoulder in the 27-7 loss at Wisconsin on Oct. 30 and struggled the first three series at Northwestern the following week. Padilla replaced him and led the Hawkeyes to a 17-12 win, and he was the starter in wins over Minnesota and Illinois.

“I think it’s similar with the confidence they both play with,” center Tyler Linderbaum said. “Maybe their voices are different, but that’s about it. Other than that, they both play with high confidence. The team has trust in both of them, and whoever is out there is going to make plays.”

“It just takes me a little while longer to get warmed up,” he said. “Once I’m warm, I have no pain, nothing.”

“He’s a great dude, we’re still friends,” Petras said. “Business is business. But off the field, we’re all good.”

Ferentz has said it greatly benefits the Hawkeyes to have two quarterbacks who have proved to be capable.

“At any given moment, any player can be out on the field,” Petras said. “I was preparing like I was starting on Friday, and I’ll prepare the same way Saturday.”