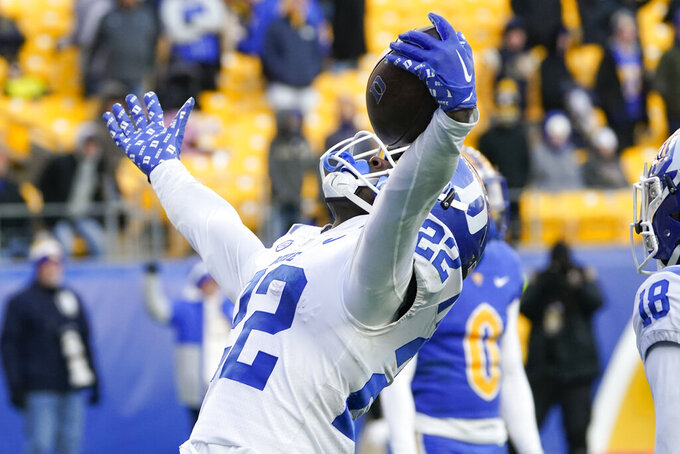 Duke running back Jaylen Coleman (22) celebrates scoring a touchdown against Pittsburgh with less than a minute left as during the second half of an NCAA college football game, Saturday, Nov. 19, 2022, in Pittsburgh. Pittsburgh won 28-26. (AP Photo/Keith Srakocic) 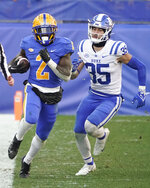 PITTSBURGH (AP) — Pittsburgh's chance to repeat as ACC champions essentially evaporated during a mistake-prone October in which the Panthers regularly beat themselves.

Faced with the prospect of giving another one away on Saturday against Duke, Pitt offered head coach Pat Narduzzi a glimpse of its growth, as anxiety-inducing as it may be for him to endure.

Israel Abanikanda ran for 113 yards and his FBS-leading 19th touchdown before leaving with an injury, Brandon Hill returned a fumble 30 yards for a score and SirVocea Dennis shut down a potential game-tying two-point conversion late in the fourth quarter to help the Panthers edge the Blue Devils 28-26 for their third straight victory.

“I'm going to go home and watch this videotape and make myself sick,” Narduzzi said after winning his 60th game with the Panthers, tying Pop Warner for second-most on the program's all-time list. “It's one of those where you go ‘Whew, we gave them too much today.’"

Maybe, but Pitt (7-4, 4-3 ACC) survived despite not having Abanikanda — the ACC's leading rusher — for most of the fourth quarter and losing star defensive tackle Calijah Kancey in the first half with an undisclosed injury. The Panthers beat the Blue Devils (7-4, 4-3) for the eighth time in nine meetings anyway despite nearly squandering a 14-point fourth-quarter lead.

“It just shows who we are, what type of defense we are," Hill said. “It's finally clicking.”

Sort of. While the Panthers kept the ACC's fifth-ranked offense in check for three quarters, things fell apart in crucial moments in the fourth.

Duke's Riley Leonard threw for 293 yards and three touchdowns, including a 19-yard fourth-down strike to Jaylen Coleman with 47 seconds to go that pulled the Blue Devils within two. Duke appeared to try its own version of the “Philly Special” on the conversion, but the Panthers swarmed Blue Devils wide receiver Jordan Moore before Moore could locate Leonard running free in the end zone.

“(They) just kind of blew up the play,” Elko said.

A nailbiter seemed unlikely after Hill's scoop and score put the Panthers up 28-14 with 13:30 remaining. Yet Pitt made a series of miscues down the stretch, including leaving Moore uncovered on a 49-yard touchdown pass that made it 28-20 with 9:28 to go. Duke curiously opted to go for two after the score, with Leonard's pass falling incomplete.

Elko said the decision to go for two so early was based on trying to win in regulation rather than risk going to overtime.

“We just didn’t feel like with the wind conditions and how we were struggling to run the football, we didn’t think overtime was going to be our best way to win that football game,” Elko said.

Pitt quarterback Kedon Slovis completed 15 of 32 passes for 190 yards with a touchdown and two costly second-half interceptions that prevented the Panthers from pulling away.

“It’s a shame,” Narduzzi said. “But we stick with our brothers down there in Charlottesville.”

Duke: With the Panthers eager to hand them the game, the Blue Devils couldn't take advantage. In addition to the fumble by Jordan Waters that Hill returned for a score, wide receiver Jontavis Robertson dropped a touchdown late in the third quarter when a fourth-down heave by Leonard smacked off his hands and fell to the turf.

Pitt: The Panthers believe they have established themselves near the upper echelon of the ACC. After a rocky October, they head into the season finale with a chance to post eight wins for the fifth time in Narduzzi's eight years on the job.

Pitt: Wraps up the regular season next Saturday at Miami.