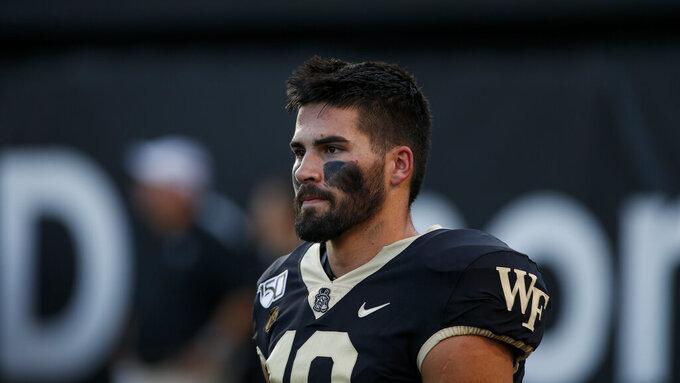 Ricky Rahne has waited a long time to make his debut as Old Dominion’s coach on the sideline.

His Monarchs visit Wake Forest on Friday night in what will be both their delayed debut under the former Penn State assistant and their return to the field after the school canceled fall sports last season due to the COVID-19 pandemic.

“Our team has been working a long time to play in this game and quite frankly, we’re ready to go,” Rahne said.

It will mark the Conference USA program’s first game since a 38-22 loss against Charlotte in on Nov. 30, 2019. Rahne was named head coach nine days later after spending the previous six seasons on the Nittany Lions’ staff, including two as offensive coordinator. He had also coached previously at Vanderbilt.

Friday’s game comes one day shy of a year when Rahne was originally scheduled to open his tenure with the Monarchs against the same opponent, with the Atlantic Coast Conference’s Demon Deacons slated to visit ODU in a neighboring-state matchup.

“We’re watching old tape and we’re really just getting ready for anything,” Wake Forest quarterback Sam Hartman said of preparing for ODU. We obviously have no idea what they’re going to do. It is difficult and it’s a challenge, but we prepare in the summer and in camp for everything.”

Wake Forest played just a nine-game schedule last year amid an extended late-season pause due to COVID-19 protocols, ending with a loss to Wisconsin in the Duke’s Mayo Bowl. The Demon Deacons are starting their push for a sixth straight bowl game.

Some other things to know about Friday’s ODU-Wake Forest game:

Old Dominion went 1-11 in its last season and hasn’t won a game in more than two full years, and there’s been a lot of turnover since. Old Dominion has just 11 starters and 26 letterwinners back from the 2019 team this year.

Wake Forest was one of the nation’s best teams last year at protecting the football, committing just one turnover through the first seven games. The Demon Deacons stumbled after emerging from their COVID-19 pause with six turnovers in the final two games, including four interceptions from Hartman against the Badgers.

“They’re a team that if they get an advantage in turnover margin,” Rahne said, “their winning percentage is through the roof.”

The Demon Deacons have thrived under coach Dave Clawson as a program that leans on developing players instead of securing top-ranked recruits. So Clawson is looking at Friday’s opener as an opportunity to build depth.

“We’d like to play a lot of people,” Clawson said, adding: “We’ve got to play guys and let them get game experience. And at times when you do it, you’ve got to live with some mistakes.”

Old Dominion has had Stone Smartt, Hayden Wolff and D.J. Mack in a three-way battle to become the starting quarterback. But Rahne isn’t saying who will take the first snap, saying “I get one more secret for one more week.”

Rahne said he decided on the starter more than week ago and the team knows who it will be.

Smartt and Wolff are back from the 2019 squad, with Smartt starting seven games that season and Wolff starting three. Mack is a graduate transfer from UCF.

The Demon Deacons will be back to normal fan attendance after playing in front of limited-capacity crowds last year due to the pandemic.

“Last year was strange,” Clawson said. “You literally were worried about yelling too loud that the other team might hear what you’re yelling. … We had hand signals last year because it was so quiet. So I think we’ll adjust back to that pretty quickly. That’s what I call a good problem.”