Receivers step up for 21st-ranked Minnesota; Purdue up next 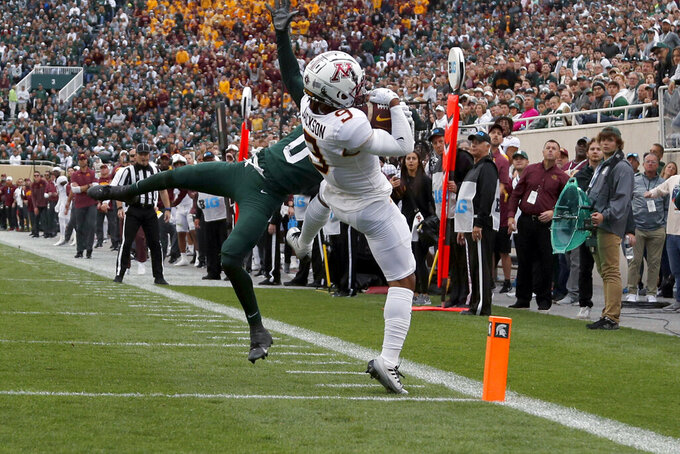 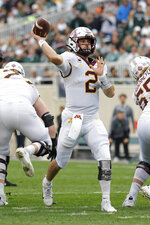 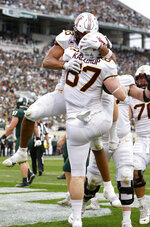 MINNEAPOLIS (AP) — Michael Brown-Stephens was taking off his shoulder pads in Minnesota's boisterous locker room last weekend, eager to join the celebration of a statement win at Michigan State when he noticed a phone being passed around with fellow wide receiver Chris Autman-Bell looped in on FaceTime.

“No offense to Crab,” Brown-Stephens said, using his injured teammate's nickname. "I forgot all about him.”

The Gophers tried to do that on the field, too.

After Autman-Bell was hurt in the 49-7 win over Colorado on Sept. 17 and had season-ending surgery on his lower right leg, Minnesota was suddenly missing its best pass-catcher and a sixth-year leader from a group that struggled over the previous two seasons with consistency and health.

What followed in the Big Ten opener in Lansing gave the Gophers quite a confidence boost — if they even needed one.

“You hate to see things like that happen, but I was called upon a lot to step up and bring the guys with me,” Brown-Stephens said. “I feel like just going into the week, game prepping and just preparing for everything, everybody just had a sense of, ‘We’ve got to be better. We’ve got to go out there and make up for this.’”

Morgan went 23 for 26 for 268 yards in the 34-7 victory over the Spartans that kept the Gophers (4-0, 1-0) unbeaten atop the West Division and pushed them into the Associated Press rankings at No. 21 for the first time in nearly two years.

The passing performance served as yet more evidence, with offensive coordinator Kirk Ciarrocca back in sync with Morgan and head coach P.J. Fleck following two seasons elsewhere, that the Gophers can move the ball just fine without solely relying on star Mohamed Ibrahim and their conference-leading running game.

“We have guys that we trust that can go out there and make plays, and they’re showing it to us at a consistent level,” Morgan said. "They’re only going to continue to go out there and get better.”

Even factoring in the level of nonconference competition, the Gophers could hardly be playing better at this point of the season. They've outscored their opponents 183-24 and rank near the top of the FBS in several statistical categories as as team. Then there's Ibrahim, who is second in the country with 567 rushing yards in a remarkable return from a torn left Achilles tendon.

Purdue's defense will have its hands full on Saturday afternoon at Minnesota.

The Gophers lead the FBS in possession time with an average of 40:33 per game.

Morgan is in his sixth year, one of Fleck's original recruits and a player so mature he got married over the summer. Purdue quarterback Aidan O'Connell is also off the market after a July wedding and is a sixth-year player who has put himself near the top of the program's all-time lists in rare air with the likes of eventual NFL passers Drew Brees, Kyle Orton and Jim Everett.

O'Connell's status, however, is unclear for Saturday. He was held out of last weekend's 28-26 win over Florida Atlantic with an unspecified injury suffered in the first quarter on Sept. 17 in a 32-29 loss at Syracuse. O'Connell finished that game, but Austin Burton took his place after that. Brohm said Michael Alaimo would likely take some snaps, too, if O'Connell is still sidelined.

“Both those guys worked hard last week and we’ve got to try to utilize them as well as we can,” Brohm said.

Minnesota is one of 21 remaining undefeated teams in the FBS, one of four in the Big Ten and the only one in the conference's West Division. Georgia and Washington are the only others in the country who have yet to trail at any point this season.

Brohm beat Fleck when they were both Big Ten rookies, a 31-17 victory by the Boilermakers at home in 2017. The Gophers have won the last four matchups, though, and eight of the last nine games in the series overall.

This is Minnesota's homecoming game, and fans have been encouraged — depending on their seating section — to wear either maroon or gold clothing in hope of creating a two-tone hue around the stadium bowl. The university has dubbed this the “ Stripe Out ” game.