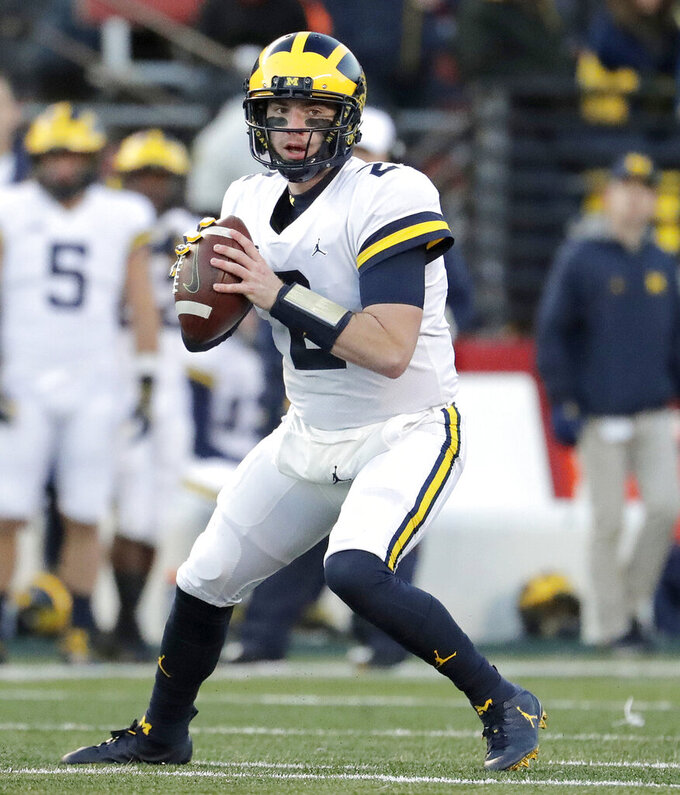 FILE - In this Nov. 10, 2018, file photo, Michigan quarterback Shea Patterson looks to pass against Rutgers during the first half of an NCAA college football game, in Piscataway, N.J. The NCAA quietly made a big change last year that helped quarterback Shea Patterson play for Michigan and will determine whether Justin Fields is eligible this fall at Ohio State.(AP Photo/Julio Cortez, File)

A much quieter change, however, helped quarterback Shea Patterson play for Michigan and will determine whether Justin Fields is eligible this fall at Ohio State. The modification to the waiver process can be seen as something of a compromise that has cleared the way for more athletes to switch schools and play right away.

Immediate eligibility for all transfers was considered, but ultimately not included in the NCAA's well-publicized reformation last year. New rules no longer require athletes to request permission from a school to transfer, just provide notification. Then the athlete's name is entered into an NCAA-run database, the so-called transfer portal that notifies other schools the athlete can be recruited.

The new legislation, however, did not change the waiver guidelines. That modification was approved by the NCAA Division I Council in April , with few outside the process noticing.

Before the change, immediate eligibility for an undergraduate transfer could be granted only when a school could show extremely egregious behavior by the previous school. Otherwise, the most NCAA officials could grant was an additional year of eligibility, tacked on at the end of a college career.

A request for immediate eligibility can now be granted if the transfer was due to "documented mitigating circumstances that are outside the student-athlete's control and directly impact the health, safety and well-being of the student-athlete."

There is a lot of wiggle room in there for discussion.

Patterson's was the first well-known case to go through under the new guidelines. He transferred to Michigan after Mississippi was hit by NCAA sanctions.

Patterson was granted eligibility for the 2018 season in late April , and several of his former Ole Miss teammates later had their waivers approved. Other cases drew attention, too, including receiver Demetris Robertson being allowed to play immediately after transferring from California to Georgia. Running back Antonio Williams was granted immediate eligibility after transferring from Ohio State to North Carolina.

Attorney Tom Mars worked with Michigan on Patterson's waiver and now is helping Fields, the former five-star recruit who has transferred from Georgia to Ohio State. Mars said the waiver change so far seems to have been a positive step by the NCAA.

"By enacting a new rule that allows such allegations to be described as mitigating circumstances instead of egregious behavior, the NCAA has encouraged member institutions to settle these matters without the student-athlete's previous school having to admit to any wrongdoing," Mars said. "Over time, this more collaborative approach to addressing waiver requests is likely to result in more positive outcomes for student-athletes. What's more, the new rule's endorsement of cooperation between the two schools will undoubtedly result in speedier decisions by the NCAA staff."

The rate of transfer waiver approval from April 1-Nov. 9 was 66 percent across all sports, down from the 2017-18 school year when it was 83 percent. But waivers requested before April 1, 2018, include those requesting an extra year of eligibility, not just immediate eligibility.

Since last year's change, NCAA data for Division I shows:

Schnase said more requests for immediate eligibility are being granted, but because each request is different numbers alone won't determine whether the change has been successful.

"We feel like the pendulum has swung back to the right place," Schnase said. "But how we answer that and how anybody answers that depends on the seat that he or she is sitting in. Coaches might feel one way. Presidents and ADs (athletic directors) might feel another. And student-athletes might feel a different way."