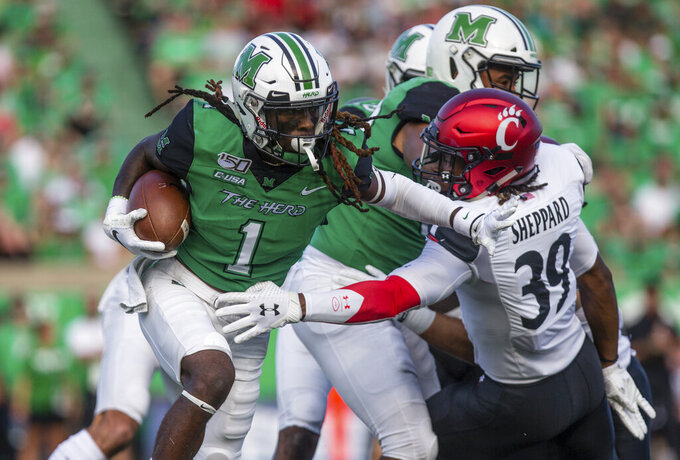 Marshall's Willie Johnson (1) attempts to get past Cincinnati's Jaquan Sheppard (39) on a kickoff return an NCAA college football game on Saturday, Sept. 28, 2019, in Huntington, W.Va. (Sholten Singer/The Herald-Dispatch via AP)

HUNTINGTON, W.Va. (AP) — Cincinnati started off slowly in its past two games and quarterback Desmond Ridder wanted to make sure that didn't happen against Marshall.

Ridder threw a season-high four touchdown passes, three in the first half, and the Bearcats rolled to a 52-14 victory over the Thundering Herd on Saturday.

Cincinnati (3-1) was dominant throughout its final nonconference tuneup before the start of American Athletic Conference play.

Cincinnati coach Luke Fickell said it was "probably the complete game we've been looking for. We've been in a little bit of a rut. We were 2-1, but it just didn't feel the same, the energy. And then after tonight you walk in that locker room, there's a different energy."

"The past weeks we haven't started out strong. That was one big thing this week, just start off fast," Ridder said. "We did that. We prepared and executed."

Ridder had TD tosses of 13 yards to Rashad Medaris and 17 yards to Alec Pierce in the first quarter, and 13 yards to tight end Josiah Deguara in the second quarter.

Just before halftime, Ridder fumbled when he was hit by Marshall linebacker Tavante Beckett while attempting a pass. Deguara picked up the loose ball at the Marshall 2 and ran it in for a 28-0 halftime lead.

Ridder, a sophomore, added a 4-yard TD pass to tight end Bruno Labelle in the third quarter. Ridder completed 18 of 22 passes for 221 yards before being replaced by freshman Ben Bryant midway through the third.

"Des Ridder had a command of some things today," Fickell said.

Cincinnati led 45-0 entering the fourth quarter. Marshall (2-2) was limited to 256 yards of offense, with half of that coming in the fourth.

"Obviously that's a game we didn't play very well in any of the three phases," said Marshall coach Doc Holliday. "They came in and took it to us. From the beginning of the game, we could not get things going and unfortunately they played a lot better than we did."

Cincinnati: Ridder, whose four TD tosses matched his total from the previous three games, looked at ease in the pocket and it helped that his receivers were often wide open. It marked the first game this season that Ridder did not throw an interception. He also rushed nine times for 48 yards. Pierce had season highs of six catches for 108 yards.

Marshall: The Thundering Herd had averaged 32 points over its first three games but didn't put up much of a fight Saturday. Green missed several of his targets and Marshall struggled to run the ball until after the outcome was already decided. Sophomore quarterback Isaiah Green finished 11 of 29 for 131 yards.

"We didn't execute and we didn't make enough plays," Green said. "This football team doesn't give up. We've got to move on."

Backup running back Sheldon Evans' 13-yard TD run and Willie Johnson's 40-yard run on a reverse, both in the fourth quarter, enabled Marshall to avoid its first shutout loss at home since 1984 and its first overall shutout loss since 2000.

Bryant's first career completion was a 56-yard pass to Tre Tucker to the Marshall 1 late in the third quarter. Tavion Thomas scored on a 1-yard run on the next play.

Cincinnati and Marshall are about 150 miles apart. The Bearcats won in blowout fashion for the second straight time in Huntington. In 2008, Cincinnati won the last meeting at Marshall 33-10.

Cincinnati: Hosts No. 22 UCF in its league opener next Friday.

Marshall: Travels to Middle Tennessee in its Conference USA opener next Saturday.