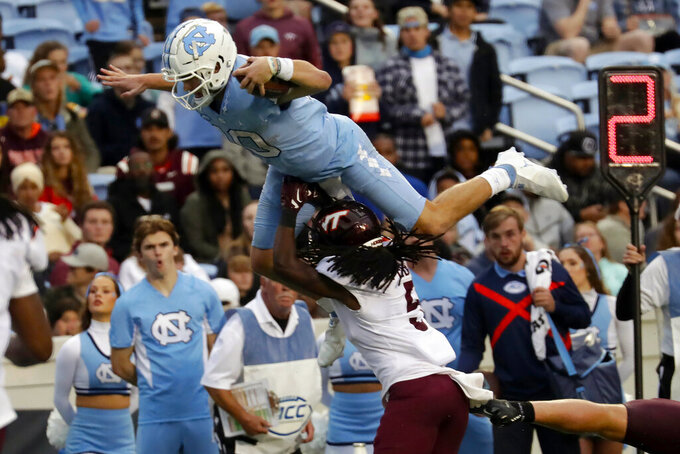 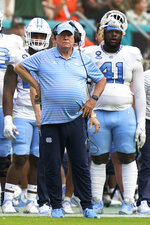 Line: UNC by 7, according to FanDuel Sportsbook.

North Carolina's offense has carried it to front-runner status in the league's always-unpredictable Coastal Division race. The Tar Heels are 2-0 in the league and can add a second road win by beating the rival Blue Devils, who stumbled at Georgia Tech in what has otherwise been a successful start under first-year coach Mike Elko.

UNC's defense vs. Duke QB Riley Leonard. The Tar Heels' defense has been shaky all season, surrendering 32 points and 465.3 yards per game to rank at the bottom of the ACC in both categories. That unit now faces Leonard, who hasn't had the same success of late in moving the ball through the air. Leonard has two 300-yard passing games but threw for 129 yards in a win against Virginia and 136 yards in last weekend's loss to Georgia Tech.

UNC: QB Drake Maye. The second-year passer is third in the Bowl Subdivision ranks by throwing for 21 touchdowns compared to just three interceptions.

Duke: WR Sahmir Hagans. The second-year player returned a punt for an 81-yard touchdown in the Georgia Tech loss. That marked the program's first punt return TD since the 2014 Sun Bowl.

UNC has won three straight meetings in the longtime rivalry. ... The winner gets the Victory Bell, a cart carrying a former railroad engine bell used in the rivalry in the late 1940s. The winner typically paints the cart its shade of light or dark blue. ... UNC coach Mack Brown has won his last 11 matchups with Duke going back to his first tenure with the program, a streak that began in 1990. ... The Blue Devils' last win in the series came in November 2018. ... Duke has gone from finishing last in the ACC in turnover margin last year to being tied for 15th in the FBS at plus-1.17 per game.