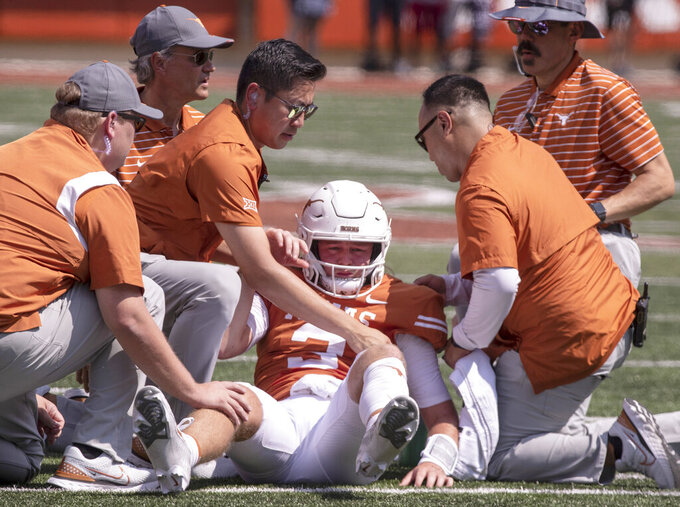 Texas quarterback Quinn Ewers (3) is helped up off the ground after a hit and personal foul by Alabama linebacker Dallas Turner during the first half of an NCAA college football game, Saturday, Sept. 10, 2022, in Austin, Texas. Texas' Ewers was injured on the play leaving the game. Ewers did not return to the game. (AP Photo/Rodolfo Gonzalez)

AUSTIN, Texas (AP) — Texas coach Steve Sarkisian on Monday would not give any hint who will be the No. 21 Longhorns' starting quarterback this week for a matchup with UTSA, and insisted that injured Quinn Ewers and top backup Hudson Card are “day-to-day.”

But there are signs it could be the No. 3 redshirt freshman Charles Wright on the field when the Longhorns (1-1) face the Roadrunners (1-1).

Ewers left the game with an injured shoulder after a hard hit at the end of the first quarter in Saturday's 20-19 loss to Alabama. Ewers had his left arm in a sling after halftime and Card finished the game despite obviously limping with an ankle sprain in the second half.

Sarkisian said after the game that Ewers had a sprained clavicle and would undergo further tests, but he did not elaborate in his weekly news conference on either quarterback's situation. Nor would he say who took snaps with the No. 1 offense in practice Sunday and Monday morning.

“That's for me,” Sarkisian said.

“I know you guys are going to want an exact timetable," he said. “I'm going to tell, you know, they are day-to-day. I really don't know. We are going to have to monitor them every morning.”

And then there's Wright, who was the No. 3 on the sideline against Alabama.

“We know that Quinn’s hurt. Hudson has his ankle. We have to get Charles up to speed and have him comfortable with everybody in the offense,” Texas running back Bijan Robinson said. “We’re going to make sure he’s right and that he understands the situation that he might be put in.”

Sarkisian said freshman Maalik Murphy, who reported to campus in January and took part in spring drills, has not been healthy but did not elaborate.

For Texas, injury problems potentially go even deeper. Defensive back and kick returner D'Shawn Jamison left the Alabama game with a leg injury.

Sarkisian would only say none of the injuries requires surgery.

Sarkisian also said Robinson, who was favoring his right shoulder after taking several hard hits, was day-to-day. But the running back said he expects to be practicing again by midweek and be ready to play the game.

Losing both Ewers and Card would be a blow to an offense that started fast against Alabama. Ewers passed for 134 yards in the first quarter before he was injured.

Card was the starter for the first two games of 2021 and filled in well behind Ewers against Alabama. Wright lingered around the offensive sideline huddles but never took the field.

“Charles was next man up,” Sarkisian said. "I give Charles a lot of credit. He’s made leaps and bounds from a year ago. I think he’s got a good grasp of our offense, a good understanding of managing things. I think he’s thrown the ball much better, much more accurately, and is a lot more confident, which is needed at that position.”

Another option would be to use running back Roschon Johnson in a “Wildcat” formation where he takes a direct snap. Johnson was a quarterback in high school and Texas used the formation with success in a season-ending win at Kansas State last year.

“Whatever we ask him to do, he does it,” Sarkisian said "I think he’s more than equipped to handle the Wildcat.”

UTSA coach Jeff Traylor said he expects any quarterback on the field will be ready to run Texas' game plan.