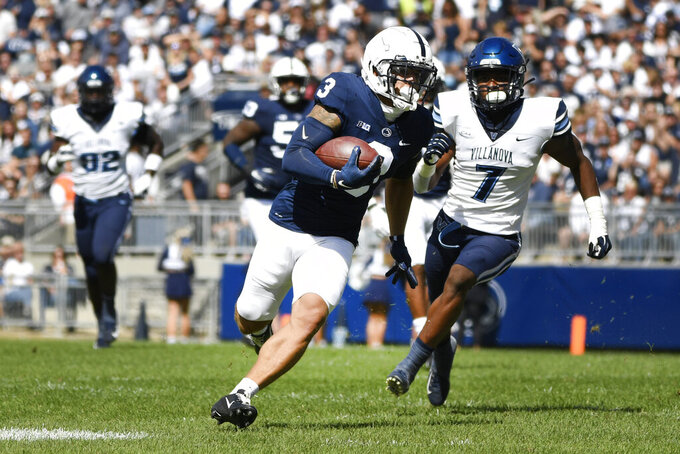 Sure, the No. 6 Nittany Lions (4-0) might have put up plenty of points and a gaggle of yards in their 38-17 win over Villanova on Saturday, but they did so without the intensity Franklin believes has fueled their eight-game winning streak.

Maybe there was a hangover effect after Penn State outlasted Southeastern Conference foe No. 23 Auburn in a back-and-forth, marquee slugfest a week ago?

Franklin saw it as early as Wednesday when practice was flat and uninspired.

“I feel like our guys a little bit were enjoying people patting them on the back,” Franklin said. “We talked about it all week long. I don’t know if we had the same edge today that we’ve had for the previous three weeks.”

But they did have a big edge talentwise against their in-state FCS opponent and Sean Clifford took advantage. He passed for four touchdowns and a career-high 401 yards on 19-for-26 passing. Clifford found Parker Washington for two TDs and Jahan Dotson and KeAndre Lambert-Smith for one apiece. Tyler Warren rushed for a touchdown and Jordan Stout kicked a field goal for the Nittany Lions, who led 17-3 at the break.

It didn’t take long for Penn State to showcase its speed advantage.

Early in the second, the Wildcats pressured Clifford and brought him down at midfield for their first of three sacks on the afternoon. But the fifth-year senior popped up and fired to Washington crossing over the middle on the next play. Washington sliced through the Villanova secondary for a 52-yard score that made it 14-3.

Stout added a 29-yard field goal before halftime, but Penn State missed an opportunity for an even bigger lead.

Cornerback Johnny Dixon dropped what could have been a Pick-6 midway through the first half, and the Nittany Lions’ final two possessions were spoiled by a holding penalty and a sack.

“Good enough to win the game,” Clifford said. “I felt like we left a lot out there."

Clifford continued to hook up with his receivers for big plays in the second half. Lambert-Smith caught a quick pass and beat the Wildcats for an 82-yard score on the second play of the third quarter. Later in the third, Washington found a hole in coverage and Clifford found him for a 23-yard touchdown pass and 31-3 lead.

Warren added a 3-yard touchdown run off a direct snap in the fourth quarter.

“We got big-played to death,” Villanova coach Mark Ferrante said. “I think it was probably six big plays, obviously the opening play of the game on their possession and then a few other long plays. But I’m really proud of the way our defense played. I’m proud of the way our offense stuck in there and put a couple on the board at the end.”

Franklin said starting running back Noah Cain was “dinged-up” a bit last week and didn’t practice enough to get a heavy workload. Cain had just one carry for 2 yards. Penn State managed just 80 yards on 34 carries and has failed to eclipse 84 yards in three of four games this season.

Villanova tight end Tyler Will suffered a concussion and was taken to a hospital after he made a tackle on the second-half kickoff. Will was motionless for about five minutes before he was loaded onto a backboard and carted off, slightly moving his hands. Villanova staff reported that Will was receiving treatment for a concussion but was alert and had full movement in his extremities.

Villanova: The Wildcats should go into their bye week with their heads high. While their offense wasn’t able to hang with their more talented counterparts, the defense played tough and forced a Penn State offense fresh off its best game into multiple mistakes that kept the score respectable early.

Penn State: The Nittany Lions might have had a cleaner outing had they just taken what Villanova was giving them. Clifford had his first and second reads open often, but he seemed to be in go-for-broke mode much of the first half. That kind of play could cost Penn State against stiffer competition, especially if the running game doesn’t get going.