Some of rugby's best missing from first World Cup in Asia 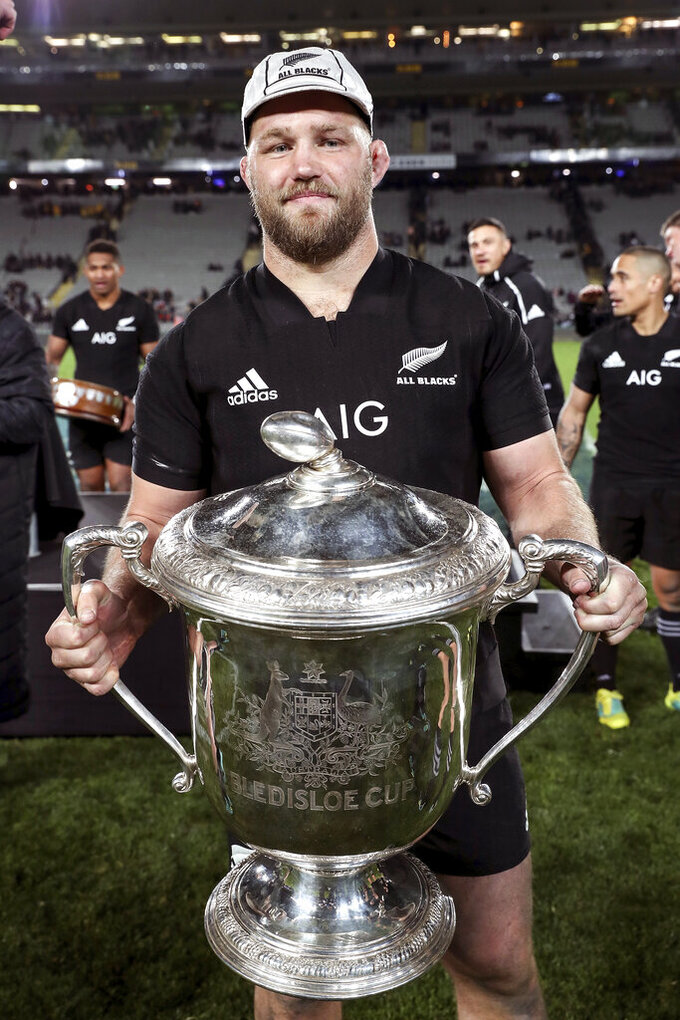 FILE - In this Aug. 25, 2018 file photo, New Zealand's Owen Franks holds the Bledisloe Cup as he wears his 100th international appearance cap for playing against Australia in their rugby test match at Eden Park in Auckland, New Zealand. All Blacks centurion Franks is one of a host of big names to be missing the first Rugby World Cup in Asia. (AP Photo/David Rowland,File)

The phone call was short. "I don't have long conversations with a lot of people," Owen Franks says with a rueful laugh.

Less than a month out from the Rugby World Cup in Japan, Hansen called Franks to tell him that although he was "one of the great All Blacks," he didn't make the squad because there were bigger and quicker props in contention.

"It is the toughest part of the job," Hansen says of telling players they missed selection, especially for a World Cup. "You're dealing with human beings who have got dreams and aspirations and your phone call is taking it away from them."

Franks admits he was disappointed.

"But I'm well aware as a professional athlete, and especially an All Black, that your time in the jersey isn't owed," he tells the Newshub news service. "I really can't sit here and complain. I've been to two World Cups and been lucky enough to win two."

Franks is one of a host of big names to be missing the first Rugby World Cup in Asia.

England discarded former captains Dylan Hartley and Chris Robshaw. Robshaw led England at the 2015 World Cup, and has grudgingly accepted over the past year his international career is over. Hartley hasn't given up though. He was dropped for that 2015 tournament but became new coach Eddie Jones' right hand man until the end of last year when he injured his knee. He hasn't played since, being stuck on 97 test caps.

"When the World Cup squad was announced, it was almost like I'd died, friends getting in touch and seeing if I was OK," he says. "For four years we have talked about winning the World Cup with Eddie, and I have led that group, been a part of that journey, so to fall at the final hurdle ... I wake up most nights thinking about it. It doesn't sit well with me, but I have come to terms with it."

Scrumhalf Danny Care (84 caps), fullback Mike Brown (72 caps), and British Lions center Ben Te'o (20 caps) were also surplus to requirements for England. Brown and Te'o had an off-field dustup in camp, and Brown didn't know if that affected their non-selections.

Parra, Bastareaud, and Doumayrou were involved as recently as the Six Nations.

"I'm not bitter at all," Parra says. "I believe in destiny enormously."

Like Parra, Bastareaud played in the last two World Cups. He reacted to his omission by retiring from test rugby and switching from center to No. 8.

At least there was consolation for hooker Tatafu Polota-Nau after missing out on a third World Cup. Australia gave him a 90th and farewell test against Samoa this month.

Some players made themselves unavailable for personal reasons, such as New Zealand flanker Liam Squire and Scotland lock Richie Gray, a British Lion and veteran of two World Cups. Australia coach Michael Cheika would have liked the option to pick 2.04-meter (6-foot-8) lock Will Skelton for another World Cup. To secure selection Skelton needed to sign to play Super Rugby next year, but he declined and instead extended his contract at English champion Saracens.

The depth of Ireland's squad was evident by coach Joe Schmidt's decision to leave at home five of the 23 who earned the first home win over the All Blacks last November.

Lock Devin Toner and scrumhalf Kieran Marmion were starters, and Jack McGrath, Andrew Porter, and Jordi Murphy were backups in that milestone match.

Toner's omission was met with the most disbelief. He even received sympathy from World Rugby vice chairman Agustin Pichot.

Injuries made Schmidt's decision easier to leave out flanker Sean O'Brien and Dan Leavy, much like injuries in the final weeks ruled out Wales stars Taulupe Faletau and Gareth Anscombe. Props Rob Evans and Samson Lee also had injury issues.

Argentina omitte No. 8 Facundo Isa, prop Ramiro Herrera, and wings Santiago Cordero and Juan Imhoff, who all featured at the last World Cup. Isa, Herrera, and Cordero were involved in the recent Rugby Championship. But the Pumas prioritized home-based players, and only three overseas players made it.

"Of course, it hurts, but nothing is given," Imhoff says. "I did not expect to be selected merely on my name. I did not meet the expectations of the coach."

Injury robbed two who would have appeared in a fifth World Cup. Only Samoa wing Brian Lima and Italy flanker Mauro Bergamasco have been to five, and Italy captain Sergio Parisse will join them on Sunday.

But Georgia fullback Merab Kvirikashvili and Uruguay lock Rodrigo Capo Ortega hoped to join them. The 35-year-old Kvirikashvili played in all four of Georgia's World Cup wins, but injuries prevented him from appearing this year.

Capo Ortega, Uruguay's greatest player, appeared in the 2003 World Cup then concentrated on his club career at Castres. His only appearances for Uruguay in this decade were to help the Teros win World Cup qualifiers in 2014 and 2018. A herniated disc has ruled him out.

Akihito Yamada was on the wing the day Japan shocked the Springboks in 2015, and hoped to appear in his home World Cup. But Yamada hasn't played for Japan since last November. He's told the selectors that though he's going to Lyon on a short-term deal, he's available if there are injuries.

He's hopeful for a phone call.